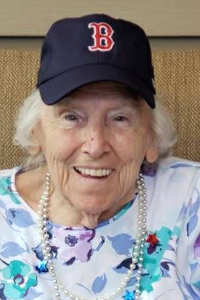 Barbara L. McElhinney, age 90, of Woburn, formerly of Winchester and Centerville, MA, passed away surrounded by her children on February 4, 2021. She was the beloved wife of the late Ret. Winchester Fire Chief Robert “Bob” McElhinney. Born in Braintree, Barbara was the daughter of the late Harold “Harry” and Freda (Payzant) Neal. She was raised in Braintree, MA and was Braintree High School Class of 1948 Valedictorian. Barbara married the love of her life, Robert “Bob” McElhinney; they settled in his hometown of Winchester where they raised their six children. She and Bob retired to Cape Cod and enjoyed more than twenty years of retirement. Barbara loved to sing and had a beautiful voice. She was known for making the best “Congo Bars”. Barbara was also an avid sports fan, a passionate follower of New England teams, especially the Boston Red Sox.
Barbara is lovingly survived by her children: Robert McElhinney, Jr. and his wife Alice of Melrose, MA, Carol Kuhlman of St. Petersburg, FL, Anne Duran and her husband Thomas of Bridgewater, MA, Paul McElhinney and his wife Jeanne of Chelmsford, MA, Sean McElhinney and his wife Kelly of Clovis, CA, and the late Michael McElhinney and his wife Sylvia of Sharpsburg, GA. She was also the proud grandmother of Patrick Duran and his wife Karissa of Cranston RI, Michael Duran and his wife Rachel Wood of Waltham, MA, Elizabeth McElhinney of Fairfax, VA, Dylan McElhinney of Chelmsford and Braidyn McElhinney of Clovis, CA. She was the dear sister of the late Harold, Helen, Jean, Doris, Donald and Douglas.
A Funeral Mass will be held at a later date. In lieu of flowers, donations in her memory may be made to the American Heart Association, P.O. Box 417005 Boston, MA 02241-7005. www.heart.org.