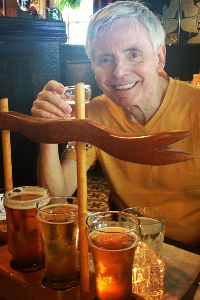 Ernest Joseph Guay Jr., 77, of Main Street in East Greenwich passed away due to Parkinson’s Disease on Tuesday February 2nd at the West View Nursing and Rehab Center in West Warwick. Just like he dealt with all experiences in life, he managed his illness with strength and grace, and wanted to spend as much time with his loved ones as possible. On his final day, he was surrounded by his children, who loved him more than anything in this world.

Ernest was born in Fall River, MA, a son of the late Ernest J. and Mary E. (Hughes) Guay. He was baptized Ernest Joseph, but his classmates knew him as “Ernie” and coworkers knew him as “Joe.” He was raised in Tiverton Rhode Island and attended high school at BMC Durfee High School in Fall River before attending undergraduate school at the College of the Holy Cross in Worcester, MA where he was a member of the crew team. Always pursuing his education, he later went on to receive two master’s degrees in Electrical Engineering and Mathematics, one from Northeastern and one from the University of Wisconsin - Madison.

He was a Cold War Veteran of the United States Navy, serving 5 years aboard the USS Thomas Jefferson as Lieutenant and Communications Officer.
He married Sheila Low in 1988 and settled down to raise his family in Greenville, Rhode Island. He was a Software Engineer, working at Bryant University, NEC technologies, Fleet Bank and most recently GTech before retiring in 2011.

Joe was always active, from rollerskating in his childhood to skiing, biking and running all through adulthood. He enjoyed glass blowing, painting and reading, specifically Scientific American and Wired magazine. He loved kayaking and sailing at Sail Newport as well as investing and trading in the stock market. His favorite weekend activities were trips to Trader Joe’s with his children and making delicious brunches. He was an avid family man, coaching his children’s sports teams, hosting weekly movie and pizza nights, and always planning special adventures and outings for his family to be together.

He was the beloved Father of Chelsea Rozen (husband David) of Warwick and Corey Guay of Durham, NC. One of his greatest accomplishments outside of his education was being a father. He had always wanted children and considered himself lucky enough to have two. He was extremely close with his children, always there for them through their ups and downs, and taught them to enjoy every moment life has to offer. He was the dedicated brother of Nancy Salibi of Tiverton, and the ex-husband of Sheila Guay of North Providence. He was the loving and dedicated grandfather of Lucy, Clara, and Josephine Rozen.

A Mass of Christian Burial will be held Thursday at 9:30am in St. Philip Church, 622 Putnam Pike, Smithfield. Social distancing and face mask will be required in church. Visitation respectfully omitted. Burial will be private. In lieu of flowers donations in his memory may be made to the American Parkinson’s Disease Association of RI, PO Box 41659, Providence, RI 02940 https://www.apdaparkinson.org

To view the stream of the service, please visit the St. Philip's Church YouTube page.