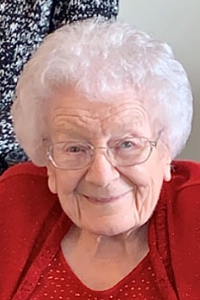 BEDFORD - Megan L. (Lewis) Zielinski, 95, formerly of Worcester and Bedford, died peacefully on Wednesday, January 27, 2021 in Carleton Willard Village, Bedford MA. Her husband, Bronislaw Zielinski predeceased her in 1985.
Born and raised in Bristol, England, she was the daughter of William and Doris (Simmons) Lewis and she was an avid bicyclist and a member of the local cycling club. She met her future husband in Bristol following WWII. Bronislaw immigrated to the United States in 1948 and she followed in 1950 to marry him. They moved to Worcester and after their children were born, she worked nights in the Operations Center of Guaranty Bank for many years prior to retiring. Megan was a member of Our Lady of Czestochowa Parish and TBPA (Trans Atlantic Brides and Parents Association). She enjoyed knitting, baking, gardening, listening to music and traveling with her close friend Bessie. Most of all, she loved spending time with her family and was a beloved mother and grandmother.
She is survived by her children, Pauline O’Bray and her husband James of Sudbury, Mary Anderson and her husband Stephen of Longs, SC, John Zielinski of Milford, CT, and Megan Jameson and her husband Edward of Bedford; nine grandchildren; nine great grandchildren; sisters; Jill Pimblett and Wendy Hamblin in England and nieces and nephews. She was predeceased by a brother John Lewis and a sister Wynn Shea.
Out of an abundance of caution for friends and family, funeral services will be held privately. HENRY-DIRSA FUNERAL HOME, 33 Ward St, Worcester is assisting the family with arrangements.