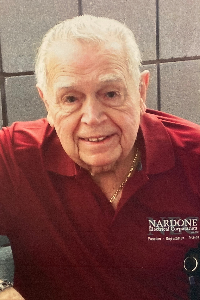 Stephen C Nardone, age 91, a 65-year resident of Medford, Ma passed on January 27, 2021. He was the beloved husband of Geraldine (McKeogh) Nardone for 65 wonderful years.

Steve was born and raised in Lynn Massachusetts, the son of Stefano Nardone and Filomena (Monforte) Nardone and graduated from Lynn English High School. From there in support of his family he worked at several jobs one of which being GE Lynn. In 1947, between World War II, and the Korean Wars he joined the National Guard 101st engineers where he was trained on repairing heavy equipment. In 1950 he went full time with the guard (Lawrence Light Guard) where he continued to work on heavy equipment, trucks, tanks, and other military vehicles. In 1961 Steve opened his own gas and repair station in Stoneham. In 1963 with a growing family of his own he made a move to Sears & Roebuck automotive center in Saugus as service manager for 30 years. In 1993 after retiring from Sears, Steve joined his two sons at Nardone Electrical Corp which was his happiest and most proud part of his retirement. At the family business, Steve did whatever he could to help his son’s whether it be working on vehicles, repairs to the properties, you name it he did it! One of his notable achievements was that he studied and obtained his Class II drivers license at the age of 66 so that he could operate the larger company vehicles. Making deliveries to job sites and picking up items from client offices was one of his favorite things to do. He loved talking and being around the team as well as making friends at the many client’s offices and seeing them from time to time. He touched many people’s hearts and we were always reminded of this!

Steve was an avid football fan and enjoyed talking sports with the guys. Whether it be with his friends having coffee at McDonalds in Medford Sq, or more recently at Wegmans he always enjoyed catching up with his buddies. He was a very knowledgeable car buff and a member of the Falmouth Classic Car Club. Up until very recent years you would find him under the hood or even under the chassis of his 1962 baby blue convertible T-Bird. In recent years he would enjoy spending summers in East Falmouth where he would be happy spending time with the whole family. Steve and his wife Gerri could be seen having coffee or lunch at the end of Falmouth harbor watching the boats come and go.

Most of all Steve loved his family and spending quality time with each and every one. He met the love of his life Gerri while he was working at the Medford Armory and she at Cradock drug. In addition to his wife Gerri Steve is survived by his beloved children: Stephen J Nardone and wife Marie (Marzino) of Winchester, Gerald R Nardone and wife Susan (Clarke) of Winchester. He was the cherished grandfather of Kristina Nardone and her fiancé Tarra Marino, Stephen J Nardone II, Alexis Nardone, Olivia (Nardone) Boyce and her husband Ian Boyce, Matthew Nardone and Alexander Nardone. He had two sisters Alba Abbondanzio and Rose Mason, both deceased. He is survived by a close family of 8 nieces and 1 nephew. Steve was a kind, patient and loving soul and we were blessed for having him for many years but the years, seem oh too short now. He will be greatly missed!

Visiting hours will be held in St. Joseph Church, 118 High St., Medford, on Saturday, February 6th, from 9 to 11 AM, followed by a funeral Mass beginning at 11 AM, with social distancing protocols. Services will conclude with burial at Oak Grove Cemetery, Medford. Military honors to follow. Army National Guard Veteran of WWII and Korea.

In lieu of flower’s contributions may be made in Stephen’s name to the American Lung Association of the North East, 1661 Worcester RD., Unit 301, Framingham, MA 01701