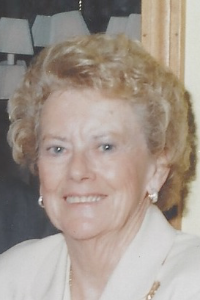 Joan Marie (Caine) Visconti, age 86, of Mansfield, passed away peacefully, in the comfort of her home, surrounded by her loving family on Wednesday, January 27, 2021. She was the beloved wife of Emery J. Visconti, to whom she was wed for sixty-six years.

Joan grew up in the Dorchester neighborhood of Boston and was a graduate of Archbishop Cushing High School in Dorchester. After finishing high school, she met the future love of her life, Emery Visconti. Joan and Emery were married in 1955 and made a “temporary” move to Mansfield in 1956. After raising her family, she returned to school and completed her Associates Degree in Accounting at MassBay Community College in Wellesley.

During her career, Joan worked as a payroll manager at several companies, including Interface Group, Benrus Watch Company, Becton, Dickerson and Company, and the National Casket Company. She was remembered for her position at Drake’s Cakes, earning her the nickname with neighborhood children as “The Devil Dog Lady”.

A devout Catholic, Mrs. Visconti was a communicant of Saint Mary’s Church in Mansfield, where she also taught CCD and enjoyed volunteering at the Mansfield Town Hall. Joan was an avid Red Sox and Boston Sports Fan. She enjoyed keeping up with current events, spending time with her adoring family, gardening and wearing the latest fashions. She loved her yearly trips to Cape Cod, vacationing in Naples, Florida and will always be remember for the special place she had in her heart for former family pets.

In addition to her husband, she is survived by her devoted sons: James J. Visconti and his life partner Louise Benvissuto of North Attleboro and Dennis E. Visconti of Mansfield and his late wife Janet Visconti. She was the cherished grandmother of Anthony Visconti and Jessica Visconti, both of Mansfield. She was the dear sister of the late Catherine Powlitis, Barbara Mancinelli and Henry Caine Jr. She is also survived by many loving nieces and nephews.

Her Funeral Mass, to which relatives and friends are cordially invited to attend, will be celebrated on Monday, February 1st at 11:00 A.M. in Saint Mary’s Church, 330 Pratt Street (Route 106) Mansfield. Burial will follow at Knollwood Memorial Park in Canton at 1:00 P.M.

Visiting hours are omitted and in lieu of flowers donation in Joan’s memory may be made to Our Daily Bread, 15A West Street, Mansfield, MA 02048.

To send her family a message of condolence please visit www.shermanjackson.com