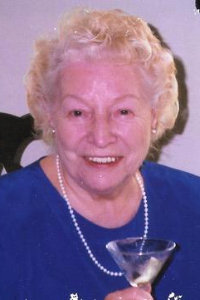 Albina lived a long and full life consisting of great food, world travel and countless numbers of friends and family with whom she loved to visit. It is said that she never met a stranger. She was born in the small Italian village of Castel del Giudice, on July 14, 1920, to the late Joseph and Josephine (Contestabile) Perella, and came to the US in 1924. She was raised in Boston’s South End and lived most of her young adult life in South Boston before moving to Braintree, MA.

Besides being a fabulous cook, wife and mother, she held jobs outside of her home; National Hosiery in Boston, the lunch counter at Kresge’s at the South Shore Plaza in Braintree, MA, and for many years she was a hospital volunteer. After the death of her second husband in 1999, she moved to Brooksville, FL for 16 years, and in her last three years she lived with her family in Meredith, NH.

She is survived by her loving children, Patricia Ward of Whitman, MA, Ellen Coates of Santa Ana, CA, and Joseph Santucci and his wife, Kimberly, of Meredith, NH; cherished grandchildren, Patti Ward of Braintree, MA, Kenneth, Scott and David Krueger of Santa Ana, CA, Michael Krueger and his wife, Sasha, of Vajont, Italy, and Tyler Santucci of Meredith, NH; and great-grandchildren, Dominic and Amedeo Krueger. She is predeceased by her brothers Alphonse and Henry Perella and sister-in-law, Rose; former husbands Joseph Cass and Anthony Santucci, and long time partner, Douglas Martin.

She will be cremated and her remains will be buried next to her late husband, Anthony Santucci, at the Blue Hills Cemetery in Braintree, MA, at some time in the future.