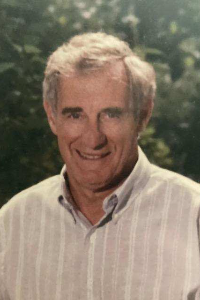 Richard H. McKoskey
Born: July 23 1929 - Died: January 15, 2021
Richard Harvey McKoskey died at St. Therese Hospice at St. Odilia in Shoreview, Minnesota on January 15, 2021.
Richard was born in La Crosse, Wisconsin to George McKoskey and Ruth (Houle) McKoskey. Richard and his wife, Audrey were married at St. Leo’s Church in St. Paul, Minnesota on March 1, 1969. Richard graduated from the University of Wisconsin River Falls with a Master’s degree in education in 1971.Richard was a high school administrator for 25 years in the White Bear Lake Area school system.
After retiring in 1994, he worked part time at a group home for special needs patients and also volunteered for more than ten years for the Center for Victims of Torture.
In his life, Richard was a small aircraft pilot, a scuba diver, and an avid golfer and swimmer.
More than anything, Richard lived for his wife, Audrey, his two children, and his five grandchildren. He was a servant of God whose faith was evident in the kind and gentle way that he treated people he knew and people he didn’t know.
Richard had a huge library of original dad jokes, and was heck to play cards with. He was dearly loved, and he will forever be missed.
Richard is survived by his wife, Audrey (Hagen) McKoskey, son David McKoskey (Avisia Whiteman), daughter Caroline Hagen, sisters Virginia Kiss, Joanne Schultz, Annette Burns, and brother Jerome McKoskey (Mary), and grandchildren Mariah Reike (Mitch), Laura Rotering, Henry, Eric and Ruth McKoskey.
Preceded in death by sisters Mary Espenes and Laurel Andersen, and younger brother Bud (George) McKoskey.
Richards’ funeral will be a held at 11 a.m. on Friday, January 22 with immediate family only in person. All are welcome to attend virtually by livestream at https://churchofstpiusx.org/spxlive. A celebration of life is planned for July 2021.
In lieu of flowers, memorials are preferred to Second Harvest Heartland at https://www.2harvest.org/.