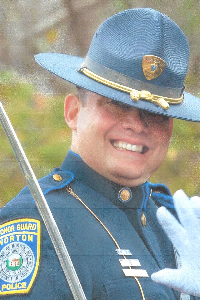 Detective Sergeant Stephen R. Desfosses, age 52, a longtime respected member of the Norton Police Department, passed away, surrounded by his loving family, on Wednesday, January 13, 2021 at the Beth Israel Deaconess Medical Center in Boston. He was the beloved husband of Jessica C. (Vogan) Desfosses, to whom he was wed for twelve years.

Steve grew up in Norton and was a 1986 graduate of Norton High School. He proudly served his country as a member of the United States Army and Army Reserve.

Steve resided with his family in Attleboro for the past seven years and was a former longtime resident of Norton. Whatever Steve set out to do, he always gave it 100 percent. His accomplishments were well known as a martial artist and musician. He was the owner and instructor at the former Ken-Ryu Karate Studio in Norton, played drums in the Army Corp Band and had the privilege to perform for the late President Ronald W. Reagan.

Steve’s family was truly the focal point of his life and always came first. When younger, he was a highly skilled diver, enjoyed brewing beer, was a motorcycle enthusiast and a member of the Iron Pigs Motorcycle Club. An ardent fan and longtime season ticket holder of the New England Patriots, Steve enjoyed his most recent hobby as a fish keeper and taking care of the multiple aquariums that adorned his home.

His Funeral Mass will be celebrated on Wednesday, January 20th at 11:00 A.M. in Saint Mary’s Church. Burial, along with police and military honors will follow at the Norton Common Cemetery in Norton.

In lieu of flowers, Stephen’s family has requested that contributions in his memory be made to the Desfosses Children’s Educational Fund, care of Bluestone Bank, P.O. Box 369, Norton, MA 02766.

Those sending floral tributes are asked to have them sent directly on Tuesday to Saint Mary’s Church in Norton.