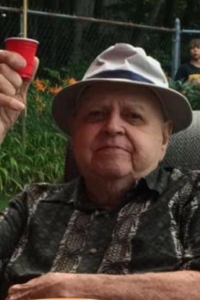 Joseph F. Iacobucci, 93, of Abington, passed away Monday January 11th after a brief illness. He was the beloved husband of the late Ellen (Isacson) Iacobucci.

He was born in Quincy, son of the late Renato and Emma (Vignoni) Iacobucci.

Longtime resident of Abington, he worked as a union mason for many years. Best remembered for his cooking and baking.

He was the most loving and caring man and beloved his family.

Relatives and friends are invited to attend his visitation on Friday January 15th from 4-7 pm in the Blanchard funeral Chapel, Plymouth Street (Rte. 58 at the rotary circle) Whitman. Funeral service and burial will be private.