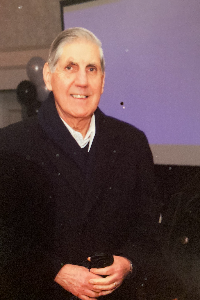 Michael Sanna of Abington passed away peacefully on January 10th, 2021.

Michael was a loving husband, father and grandfather, and uncle. He was the son of Olga DiCicco Sanna, and Guido Sanna. Brother of the late Robert Sanna and Mary Ellis. He was the loving husband of Barbara. A loving father to Suzanne, Michael and his wife Lisa. And a loving grandfather of Brittany, Shauna and Jordyn.

Michael was a lifelong resident of Abington, where he resided with Barbara for many years. Michael would proudly share many fond memories of his hometown and his younger days with his loved ones. Memories of how he played halfback for Abington's football team, and years later, went on to coach Abington's soccer team. Michael was also a referee for a few of Abington's spring league soccer games, and a Chairman of the Abington Financial Committee.

Michael was a brilliant man, and a great writer. He served in the United States Army and was part of the Intelligence Department where he was stationed in Germany.

Michael was a graduate of UMASS Amherst, part of the fraternity Lamda Chi Alpha. It was there he co-authored a book with Dr. Francis, and graduated with his Bachelor's in Food Science. He later went on to graduate from Bridgewater State with a Bachelor's in Education. Years later, he was a columnist for the South Shore News, and proudly wrote the column "Let's Talk about Food." In addition, he was an officer in IFT (International Food Technology). Michael also worked at James O. Welch as a Candy Technologist, and later worked for Ocean Spray in Hanson. He was a Food Scientist at Brady Enterprises for 51 years.

Michael was most remembered by his family for his kindness, sense of humor, and love of classic movies. Michael loved the Alabama Crimson Tide football team and the Bruins. Michael also was a man of faith, who taught Sunday School, and shared his love and devotion for the Lord.

A private service will be held for his family. In lieu of flowers, those that wish can make a donation to the Disabled Vets National Foundation, in his memory. His family thanks you for your kindness and compassion.