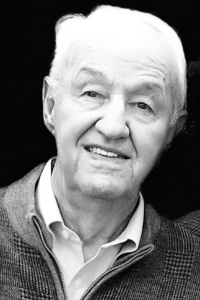 LACONIA-----On the afternoon of New Year’s Day 2021 one of the Lakes Regions most beloved sons, John “Jackie or Jack” Philip Irwin peacefully past through his God’s heavenly gates.

Young Jackie Irwin grew up and played in the close-knit neighborhood of Lakeport, NH. Later, he often told of the joyous days playing in the barns and the fields of what was later the Hathaway House in Lakeport. Jackie also reminisced of playing and working around the Weirs Boardwalk and Irwin’s Winnipesaukee Gardens and the undercover boat livery below, which his father James R. Irwin, Sr. had built back after the Great Weirs Fire in 1924. Every morning Jackie could be found picking up popcorn boxes and litter that had been discarded from the boardwalk above the night before. At an early age Jackie was the first to lend a helping hand and always showed his untiring work ethic. He told of helping Captain Tuttle secure rowboats in Paugus Bay during the great hurricane of 1938. Jack also watched as the original side wheeler, Mt. Washington burn on August of 1939 and later viewed the launching of the NEW Mt. Washington II, which his dad brought to the area a year later. Jackie was a deckhand on the famous Flying Yankee tour boat in the 1940’s and was the youngest recorded holder of a NH Commercial Licensed boat pilot back at age 15. He also piloted the Miss Winnipesaukee speedboat rides during the mid-1940’s and early 50’s.

Jackie was well known for his athletic abilities and prowess throughout all his life. He played four sports at Laconia High School; football, basketball, baseball and track. In high school he had great coaches such as Irwin Smith and Jay O’Conner, who had a great influence on his life and taught him “character” as well as the sport. This served him well throughout the rest of his life and carried over into business and personal matters. Jack said that Coach O’Conner taught the true fundamentals; kindness, humility, how to block, how to tackle, when to tackle low and when to tackle high. He called it “Head, neck and shoulder football”. Coach preached that you never let a receiver get ahead of you! Jack made All State in High School Football and won the State class A 100 and 200 yard dash in track. He played first string football at Boston College where he started every game at safety for three years, did the punting, played halfback at times and ran back kicks. He played quarterback in the Holy Cross game when Coach Mike Holovak ran out of quarterbacks in 1953. BC won the game 6 to 0. He was selected for the National High School All-American Team in 1949 and was invited to play in the All Star game in Texas the following year. Jack was a graduate of Boston College Business School in 1954. Jack retired from the US Marine Corps as a 1st Lieutenant Platoon Leader in 1957. As a side note, November 10th, the Marine Corps birthday was always a celebration in the Irwin home!

After retiring from the Marine Corps Jack joined his father in running the Weirs marina operations and the Gardens Ballroom and Boardwalk along with the New Marina built in Lakeport. The Gardens Ballroom and Pier Restaurant had the capacity of 2,200 patrons and often would bring in musical giants of the time such as Duke Ellington, Harry James, Count Basie, Lionel Hampton and Les Brown to name a few. In the later years of Rock n’ Roll the Dance Hall saw such acts as the Beach Boys, Gary Pucket and the Union Gap, the Shawn Dells, the Kinks and Paul Revere and the Raiders. One of the last acts was the jazz trumpet of Maynard Ferguson during the summer of 1974, illustrating Jack’s eclectic taste and was the beginning of son John’s love of Jazz. Jack ran the Weirs operation with his older brother, Jim (James R Irwin, Jr. ) up until 1975 when the Gardens and Boardwalk were Sold.

Jack was very proud that his sons, John and Bill both worked through their school years at both the Lakeport marina and the Weirs operations, learning the family business from the ground up. Both started out with Jackie’s original job, picking up popcorn boxes under the boardwalk. In 1975 both sons went to college, John to Syracuse University (BFA and BA) and Bill to St. Anselm College (BA). After college both had successful careers but in the mid-80’s they both came back and joined Dad in the family business. At that point Irwin Marine was nationally ranked to be the oldest Chris-Craft dealer in the world being over 66 continuous years in the business. At that point, Chris-Craft was known as the largest pleasure boat company in the world.

Jack was a very dedicated as a “roll-up his sleeves” kind of a leader. He always believed that if you weren’t willing to do the work yourself then you should never pass it on to someone else. Shortly after 1986 Jack decided to join Connie Ray by taking on Sea Ray Boats to further augment their offerings. Sea Ray quickly became a mainstay of the business. Irwin Marine grew and built-out many of its facilities and added to its infrastructure. Over the years Irwin Marine has grown to have three main locations, the main facility in Laconia, NH, Alton and Alton Bay and another Location in Litchfield/Hudson, New Hampshire. Each location is a full service location with boat sales, Ships Store, Parts Department, in water/winter & summer dry storage and body shops. Irwin Marine also has large, mostly full service Satellite locations at Mountain View Yacht Club & Marina in Gilford and South Down Shores in Paugus Bay. For the last six years Irwin Marine has been chosen to be one of the very Top 100 marinas in North America by the Marine Retailers Association of the Americas (MRAA) and Boating Industry Magazine. Last year they were ranked number 12 in North America. Irwin Marine just proudly celebrated 100 years in the marine business in 2019. Jack was proudly the Past President and Treasurer of Irwin Corporation (Irwin Marine), James R. Irwin & Sons, Inc. and Irwin of Alton, Inc.

Later in life Jack married Mary Irwin (Paris) and had a daughter, Jacqueline who obtained her BA at UNH and then went on and graduated from MA Pharmacy and Health Sciences with a (BA) in radiology and is a Radiology Tech in Denver, Co.

Jack continued his love for athletics and staying in great shape right up through his very late 80’s. In his mid- 50’s he was still playing YMCA basketball and later tennis where he often thoroughly “educated” his younger peers. He was known by all his admirers, both young and old, as an amazing athlete for the ages. After tennis, when his knees and hip gave out, Jack tirelessly took to the game of golf which he swore to his sons he’d NEVER play! He was also an avid alpine skier and even coached the Sachems Girls High School Ski team in the early 1970’s. Jack was a huge supporter of the Sachem Football program. You could see him right out on the practice fields with the Sachem football players, coaching and training, passing on a life full of wisdom to the LHS special teams and punters. In Jack’s later years he was the recipient of the prestigious “Jim (Red) Hayes Award for Community Support.

Jack has always been extremely active in the Marina community, both locally State and National levels. Jack was one of the incorporators of the New Hampshire Marine Trades Association [NHMTA] and was at one time or the other one of its many leadership officers. He was also a Director for the New England Marine Trades Association [NEMTA]. He served as one of the original officers of the Marine Retailers Association of the Americas [MRAA]. In many instances Jack could be found down at the NH State House working on bills and often testifying and being a good steward for New Hampshire’s waterways, nature and boaters rights. Jack always loved his great lake, Winnipesaukee. Jack was a life member of the United States Power Squadron. He served on the Laconia Planning board for seven years and was chairman for 3 years. Jack also was a Commissioner of the Lakes Region Planning Commission for 12 years (1964 thru 1970). He was an incorporator of the NH Saving Bank and past Director of the Lakes Region Conservation Trust. He was an active licensed Real-estate Broker for the State of NH and one of the original directors of the NH Business Development Corporation in 1967. He was a long-time committee member of the establishment of the NH Wetlands Rules. He participated in many NH Legislative activities representing many important initiatives. He was a life member of the Laconia Lodge of Elks #876.

Adhering to the guidelines of the State of New Hampshire and the CDC, social distancing is strongly encouraged and face coverings will be required. Only 120 guests will be permitted in the church at one time.

A Celebration of Life will be at the Laconia Country Club after burial.