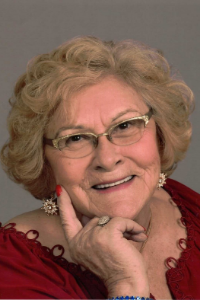 Christa Maria (Mehler) Small, 77, of Clearfield, PA and formerly of Glen Campbell, PA passed away peacefully at her home on Friday, January 8, 2021.

The daughter of Phillip and Elizabeth (Llutz) Mehler, she was born on December 11, 1943 in Hochheim, Main-Taunus-Kreis, Germany.

Christa was a lifelong devout Roman Catholic, who loved the Lord and her church. As a member of the Church of the Resurrection, Christa attended services at the Glen Campbell site, where she was active in the Rosary Society and the church choir, as well as assisting with funeral meals and the annual Lenten fish dinners. She was particularly well known for baking her famous German black forest cakes and maple walnut twists.

Christa cherished her German heritage and her family members in Germany. Raised in Aschaffenburg, Germany among her mother’s closeknit family, she considered her cousins, Helga Bitzer and Ruth Neissner to be her sisters. They enjoyed many visits together over the years on both sides of the Atlantic Ocean. Christa took great pleasure in serving as the American tour guide for all of her visiting German friends and family.

In embracing modern technology, Christa was able to stay in touch with family members stateside and in in Germany. She also maintained long lasting friendships with several local area women who were also raised in Germany.

Christa met her husband, Harold E. Small, while he was stationed with the US Army in Aschaffenburg, Germany. They wed and their family grew to include four children. After Harold’s military service relocated the family stateside, the family eventually came back to Harold’s hometown of Gipsy, PA to make their home.

When her husband at the age of thirty-seven had a stroke, her resilient spirit showed yet again, when while working and caring for her family, she enrolled in the Punxsutawney School of Beauty. Becoming a beautician was a career move that enabled her to establish the Christa Small Beauty Shop in 1980 at her Glen Campbell area home and launched her on an over forty year career as a hairstylist.

Christa exemplified an amazing work ethic that she passed on to her family – teaching them to put their heart and soul into their endeavors and to embrace their work with pride.

She possessed a kind and giving nature coupled with a wonderful sense of humor and a slightly mischievous disposition. Christa was so full of hope. She was willing to help everyone in her community. Especially if Christa learned of someone who was hungry or who could benefit from a meal, she reached out to the person or family with a homemade dinner.

Proud to have become an American citizen, she was active in supporting our troops and veterans. Christa was a former member of the Glen Campbell American Legion Auxiliary, where as President she headed a campaign to raise funds for the Flight 91 Memorial. In more recent years, she had been a member of the American Legion Post Auxiliary in Indiana, PA.

Since 1983 Christa had been a staff member of the Rairigh Funeral Home in Hillsdale, PA. Her dedication to the funeral home and her vibrant personality have been a treasured presence to her coworkers, who wholeheartedly claimed her as a special part of their work family and affectionately dubbed her “The Queen.”

Over their years of marriage, Christa and Harold enjoyed many travels and adventures together.

After her husband’s death on January 1, 2016, Christa’s ever so irrepressible spirit led her to embark on yet another new transition in her life. In 2017 she moved to Clearfield, PA. Christa created a warm and welcoming home in a neighborhood, where she truly felt “at home” and she delighted in making some wonderful new friends. Now living near her daughter Betsy and family, she enjoyed attending meetings of the Sarah Circle along with her daughter at the Clearfield Presbyterian Church.

Christa was a remarkable woman, who adeptly straddled and appreciated the experiences of her past while looking toward the future. She loved both her German ancestry and culture while being fond of her adopted American home. Christa felt her life was blessed and enriched with the presence of cherished family and friendships, and valued those both old and new, who were a part of her life.

Christa dearly loved her children and grandchildren and greatly missed her husband since his death five years ago. She shared her home with her longtime feline companion, Tim, who if she could, Christa would probably be saying with disbelief that she cannot believe Tim outlived her.

She was preceded in death by her parents; her husband of fifty-four years, Harold; her grandson, Evan Jones; her brother, Michael Mehler and her dear friend, Mary Sibley.

At Christa’s request, a private visitation was held for her family at the Rairigh Funeral Home, Ltd. in Hillsdale, PA with an interment service at the Church of the Resurrection Cemetery in Glen Campbell, PA on Monday, January 11, 2021. Fr. James Morley was the officiant.

Contributions in memory of Christa may be forwarded to the Church of the Resurrection (notated for the Glen Campbell parish site) at 349 Morris St., Clymer, PA 15728