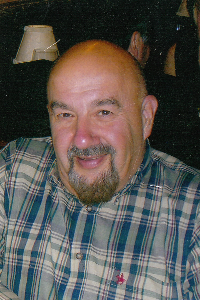 Ed Longpre was a car man through and through. From the details of an engine, to the curves of a shiny well-polished exterior, to the nuances of interiors, Ed lived and breathed cars. From that first experience at the age of 5 in taking apart his dads lawnmower (and not being able to reassemble it !!!), to the years he spent in auto sales and service, to his most treasured times as a classic car enthusiast, Ed was all about the roar and hum of some of the best cars America has ever produced. From his early years of drag racing at the speedway in Epping, New Hampshire to the leisurely rides all over the roadways of New England, Ed Longpre’s road trip of life was truly a beautiful journey.
Edgar A. “Ed” Longpre, 73, of Manville passed away peacefully Friday January 8, 2021 at Summit Commons Rehab & HealthCare Center in Providence after a period of declining health. He was the loving husband of Marguerite J. (Patenaude) Longpre. They were married on October 20, 1973 and shared 47 wonderful years together.
Born in Woonsocket, he was the son of the late Edgar M. and Cecile (Plouffe) Longpre. He grew up the greater Woonsocket area and resided in Manville for the past 47 years.
Ed was the general manager of Mack Buick in Woonsocket for many years. Before he retired Ed worked for Wurth Industries as a sales consultant in the Rhode Island area.
Edgar was a longtime communicant of St. James Parish. He enjoyed playing cards with friends & family and listening to the sounds of country-western and the throwback tunes of the 1950s and 60s.
As mentioned earlier Ed’s spare time was devoted to his love of classic cars. From his 1963 Chevy Impala to his 1923 T-bucket, that he built from the ground up, Ed immersed himself into the care and preservation of classic autos. It was a love he shared with Marguerite, with her 1963 Corvair. Attending classic car shows was right up Ed’s alley. He was a member of the RI Chevy Owners Association.
Ed was truly at home in his garage. Working on a project or just tinkering in general, his garage was Ed’s “man cave”. Ed’s “home away from home” was his corner table at Lil’& Gene’s in Manville where he was a fixture.
Ed will be remembered as a loving husband and father. His most favorite role in life was being a grandfather…. Boy-o-boy did Ed love his grandchildren with all his heart!
Edgar’s family is grateful to all his caregivers. They rejoice in that his many sufferings are over, and believe that Edgar is with the Lord at last.
In addition to his wife of 47 years Ed is survived by his two sons Keith Longpre and wife Terri-Lynn of Lincoln and Marc Longpre and his wife Bethany of Manville. Ed was the brother of Konnie Laprade and her husband Roland of Cocoa, FL. He was the grandfather of Anna, Abigail, Joseph, Khloe, Ashlyn, Kyle, and Arianna. He is also survived by many nieces and nephews and their families.
His Mass of Christian Burial will be Friday January 15th at 10:00 am in St James Church, Division St. Manville. Burial will follow in St. James Cemetery, Manville. In lieu of flowers memorial donations may be made to St. James Parish, 33 Division St. Manville, RI. 02838.
Arrangements are in care of the Menard-Lacouture Funeral Home, 71 Central St. Manville.
www.menardfuneralhome.com
The funeral service for Ed will be live-streamed on the St. James Parish Facebook page on Friday January 15, 2021 at 10:00 am