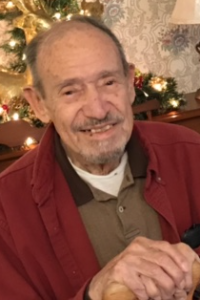 Born in Lawrence, Massachusetts on February 19, 1932, he was the son of the late Andrew and Theresa (Maimone) DeCaro. Jim graduated from Central Catholic High School and enlisted in the US Navy in 1950. He was a Radioman, third class, aboard the U.S.S. Sage (AM-111) and served during the Korean war. He later attended Merrimack College, worked as a manager for the W.T. Grant Co., a salesman for the Sherwin Williams Company, and ultimately a U.S. Postal employee. He began his postal career as a letter carrier, plying the streets of Middleboro on his appointed rounds. Jim often ascribed his good health to this daily activity early in his career. He ascended to clerk, then substitute “Postmaster” at Elmwood, and ultimately was proud to be the original clerk at the Lakeville Post Office when it opened in 1989. He met the love of his life, the late Rochelle (Matheson) DeCaro, while working at the W.T. Grant store in downtown Middleboro. They married in 1960.

Jim and Rochelle made their home in Middleboro, where they welcomed their children Christopher and Kimberly. The family summered at their cottage on Long Pond in Lakeville and ultimately moved to Rochelle’s “dream home on the water” in 1980. The couple enjoyed cruising the Caribbean, playing bocce at the Middleboro Lodge of Elks (where Jim was a lifetime member), and hosting Memorial Junior High School faculty parties. They most especially enjoyed entertaining family and friends on Long Pond, where Jim would captain the family boat for tours and water skiing as well as man the grill to be sure everyone was well fed. Jim was thrilled with the arrival of his grandchildren, Devon Elizabeth and Seth Jameson, and became their greatest fan and supporter throughout his life. He was a fixture at Devon’s plays, recitals, and pageants along with Seth’s soccer, little league, and basketball games. Jim was well-known, near and far, as an award-winning meatball maker – his “secret recipe” will forever be a family treasure. He also loved making his famous “beefa” sandwiches for Sunday Patriots games.

He was preceded in death by his beloved wife, Rochelle, on December 22, 2000.
Due to the ongoing pandemic, a celebration of Jim’s life will take place at a later date.