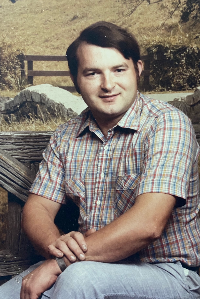 BUXTON- On January 7, 2021, John went home to be with his Lord and Savior surrounded by his loving family. He was born in the quiet countryside of his family’s home in Buffalo Springs, PA on February 15, 1952. He grew up on his family’s farm where his love for farming and gardening was cultivated, a love that stayed with him throughout his life. During his school years while he worked on his family’s farm, John raised livestock in his 4-H Club and was an active member of Boy Scouts of America. He graduated from Eastern Lebanon High School in Myerstown, PA in 1971.
Later that same year he enlisted in the United States Air Force where he served for 6 years. During his time in the Air Force, John served as a Jet Engine Mechanic and Substation Operator. He was very proud of his military service and regularly wore his U.S. Air Force Veterans hat. It was during his time in the military that John would meet and marry the love of his life, Colleen, who he was married to for 47 years. After leaving the military, he worked in numerous professions throughout his life including construction, sheet metal fabrication, a chef and baker in the food industry, a machine operator at Barber Foods, and an ice cream maker and driver at Smiling Hill Farm.
When he wasn’t working, John enjoyed taking short trips with his wife and their 3 daughters, spending summer days at the lake swimming and grilling, and growing a variety of vegetables in his garden. He was a man of many talents who loved working with his hands whether it was creatively whipping up dinner in the kitchen or building wooden furniture. John took great joy in visiting local flea markets and was always eager to find a good bargain. He was an avid reader who could remember the most random facts from books, movies and music, and he was quick to share his funny anecdotes with anyone who was nearby. John’s family was his greatest happiness. He loved the excitement of family get-togethers and spending time with his grandchildren and great grandchildren.
He is survived by his beloved wife, Colleen Zeller of Buxton, his daughters Lisa Paquette of Buxton, Heather Small and her husband Scott of Derry, NH, and Angie Horler and her husband James of New Gloucester, his grandchildren Elizabeth, Alex, Caitlyn, Jacob, Sean, Isaac, and Joshua, and 4 great grandchildren. A private family gathering will be held at Brooklawn Memorial Park. In lieu of flowers, please consider making a donation in his honor to Maine Cancer Foundation or Southern Maine Agency on Aging.
Online condolence messages can be submitted at the Chad E. Poitras Cremation and Funeral Service website, www.mainefuneral.com