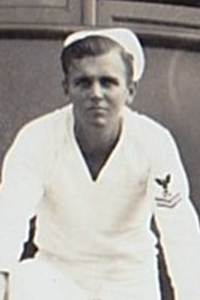 Richard served on active duty in the United States Navy Reserve during WWII and Korea and went on to retire as a Chief Petty Officer. Along with his military service Richard retired after 20 years with the State of New Hampshire as Corporal with the New Hampshire State Police and the New Hampshire Sweepstake Commission.

He was very active in the Town of Deerfield serving as a Police Officer, Scout Master for Boy Scout Troop 138 and served several terms on Deerfield School Board. After retirement he enjoyed working for the Deerfield Fair Association as the Fairgrounds Maintenance Manager.

He and Shirley enjoyed traveling and spending their winters in Florida. Richard was a member of the American Legion Post 103 and the Mason Rising Sun Lodge 39.

He is survived by four children, Linda Meyer and her husband James of Deerfield, Richard Gilson Jr. and wife Allison of Lancaster, NH, James Gilson and his wife Keiko, of Epsom, NH and John Gilson and his wife Karen of Gilmanton, NH, 10 grandchildren, 7 great grandchildren and 1 great, great granddaughter. Sisters Shirley Gould, Carole Heron and Brother Donald Gilson. Richard is preceded in death by his wife of 73 years Shirley and his sister Barbara Beane of Candia.

Services will be held at a date to be determined at the Deerfield Community Church. The burial will be in the spring at Gibson Cemetery, Marsh Road, Pelham, NH. The Peabody Funeral Homes & Crematorium of Derry, NH is assisting the family with arrangements.