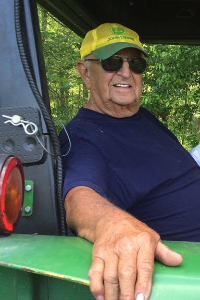 Born in Providence, RI he was the son of the late Harry W. and Gladys W. (Williams) Nelson. He lived in Chepachet, RI for nearly 50 years, having previously lived in Cranston, RI. He honorably served in the US Army.

Glen “The Axeman” was a firefighter for the City of Cranston for 41 years before retiring as a Deputy Chief in 1997. He spent his life as a farmer - raising cows and making hay.

He was the brother of the late Phyllis Cornell of Cranston, RI and Shirley Jones of Dresden, ME. He is survived by his five nephews and nieces: William Jones and Robert Jones of Maine, Diane Salisbury of Cranston, RI, Robert Cornell of N. Scituate, RI, and Janice Lane of Georgia. He was also loved by the entire Dahlquist family of Chepachet, RI and by his special friends, Mike and Allison (Hamel) Dahlquist and their boys, Michael and Samuel.

His funeral service was private and held with Military honors at Grove Street Cemetery in Putnam, CT.