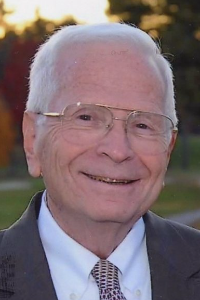 In the early morning of Thursday, December 31, 2020 Stephen Camann, 87, passed at home in Manchester New Hampshire.  Born in Laconia, NH, on October 31, 1933, Stephen moved to Manchester attending Webster Elementary School and then Tilton Academy, where he went on to be a Trustee for multiple years. He then attended UNH.
Stephen is survived by Barbara Hermann, his loving companion of 25 years; Joan Camann, former wife of over 30 years and mother to his four children; Gregory and daughter-in-law Ann Marie and their two sons Andrew and Tom; Judith and her daughter Jenalysse Renaud and partner Donovan Allen and their twins (Stephen’s only great grandchildren) Melody and Lyric; Carrie and husband Chris Pye and her son Nathan Simmons and wife Kika Westhof; and Diane and partner Hans Rolla and her two daughters Alice and Laney Flood. He leaves one older sister, Frances Graubard (91) of Newton, MA as well as six nephews, one niece and their families. Stephen was preceded in death by his father Sam, mother Bessie, sister Dorothy Goodman, and brother Bobby.
Stephen owned and operated Dunkin Donuts (and Howdy Beefburgers) for over 30 years.  However, a civic minded man, he was drawn to volunteer at Catholic Medical Center (CMC) and its affiliates. From 1985-2006 he served in many capacities including Director and Trustee on multiple committees such as Board of Governances, Executive Committee, Finance and Properties Committees and Development and Advisory.  He was presented the Charles F. Whittemore Award for his outstanding philanthropic support and spirit as lead in the rebuild of CMC into one of the largest healthcare facilities in the State of New Hampshire.
Stephen was also involved in many other facets of Manchester such as Director of Manchester Associates, Board of Governors NH Automobile Insurance Plan, Director of The Federated and Performing Arts Center and represented the private sector on the City Redevelopment Committee.
While he found pleasure exploring the New England seacoast, reading poetry, riding in his MGTF with top down as part of the New England MG Club and listening to Two Generations of Brubeck, his greatest joys remained in returning to and creating memories on Lake Winnipesaukee where it all began.
He will be laid to rest in Pine Grove Cemetery.
There will be a private family service.
Donations may be made to Visiting Nurse Association - Manchester. J.N. Boufford & Sons Funeral Home is in charge of arrangements. For more information and online guestbook please visit www.bouffordfuneralhome.com.