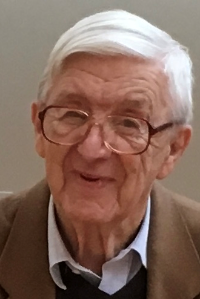 Joseph S. DeNatale, 96, formerly of Newton and Winchester, died on Friday, January 1, in Weston, MA. Born in Boston, the son of Sicilian immigrants, the late Salvatore and Mary (Tripi) DeNatale, he embraced his heritage and read widely about the history of Sicily, which he visited several times. He graduated from Everett High School, served in the US Army Air Corps, and studied mathematics and French at Boston College, where he received his BS degree in 1950. He had a long career in information technology beginning at Pratt & Whitney, in Hartford, CT, and finishing at Citicorp, in Boston, although he continued to work part time at the Clipper Group through his mid-eighties. Generous and hospitable, he and his wife welcomed into their home family and visitors from around the world, many of whom stayed for extended periods of time, first, in Winchester, and, later, in Newton. Along with his wife, he was among several founders of the Albanian Humanitarian Aid Association in the early 1990s. He was a renaissance man of many talents and interests - ranging from gardening to opera and art to furniture reupholstering and repairing home appliances. He loved conversation, was well-read, discussed many topics with enthusiasm - politics, word etymology, and history - relished bad puns and enjoyed telling stories, with great flair, about his youth, his family, and his mishaps, using his wry sense of humor to sometimes poke fun at himself but mostly to make others laugh. Decrying the casual dress of today, he always wore a sport coat out to dinner or on an airplane, and he loathed to-go food. (It was never hot enough.) Above all else, he was devoted to his wife, whom he decided to marry on their first date and whom he pursued for four years until she said yes. Every year, for decades, he would cut the first rose from his June garden and present it to her with great fanfare, often with a witticism or a poetic observation. And he was devoted to his children, grandchildren and great-grandchildren, his pride and joy, who provided him and his wife with infinite joy and happiness. Our world will forever be diminished without his infectious laugh, boundless curiosity, and most important, his absolute and endless love for all of us.
He is survived by his wife of 69 years Ellen M. (Christo), of Weston, MA, six children, Peter DeNatale (Susan), of Wellesley; Douglas DeNatale (Valerie), of Groton; Nancy Collins (Andrew), of Greenwich, CT; Lisa DeNatale (Steve Boutcher) of Burlington, VT; Joan DeNatale Green (Rick Green) of West Hartford, CT; and, Mary Ellen DeNatale (Gerry Sullivan) of Arlington, MA; 19 grandchildren and 3 great-grandchildren, as well as his sisters Rose Gardino and Virginia DeNatale and many nieces and nephews. He was predeceased by his son Joey, sisters Sarah Campanella and Mary DeNatale, and his brother Charles DeNatale. Services will be private. Donations in Joe's name may be made to the Massachusetts Down Syndrome Congress whose mission is to ensure that individuals with Down Syndrome living in Massachusetts are valued, included and given the opportunities to pursue fulfilling lives. https://mdsc.org/index.cfm