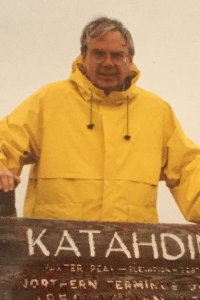 WATERVILLE- Nicholas “Nick” Rohrman, age 83, passed away on December 26, 2020 from COVID in Saco, Maine. He was born to Leroy Nicholas and Mary Ethel (O’Callaghan) Rohrman on April 25, 1937 in Indianapolis, IN. After a brief period of study at St. Meinrad’s Seminary, Nick graduated from Broad Ripple High School and then matriculated at Butler University where he was an active member of the Lambda Chi Alpha fraternity and ROTC. Upon graduation he and his wife, Carol Ann Cunningham, moved to Burns, Oregon for his career in the US Air Force. While there they welcomed their first daughter, Lisa. After completing his military service, Nick earned his Master’s degree from Miami University, and his Ph.D. in psycholinguistics from Indiana University. He began a nearly 40-year career in academia at Bucknell University in Lewisburg, PA. From there he and his family moved to Tallahassee, FL for a position at Florida State University, welcoming their second daughter, Melinda. His last, and longest position was as chair (1977-1987) and professor of psychology (1977-2005) at Colby College. Nick enjoyed the outdoors, hiking, biking and gardening, and a wide variety of hobbies, most notably as an avid reader and bagpiper. He was a member of the Masons (Siloam Lodge #92) and the Shriners and was a member of the Kora Shrine Highlanders Pipe Band for a number of years. He was predeceased by his wife of 49 years, Carol, May 1, 2009, and his brother, Martin Joseph of Indianapolis, IN, May 15, 2020. He is survived by his sister Rita Owens of Puyallup, WA; his daughter Lisa Bearce and her husband, Jim and their son William; his daughter Melinda Burgess and her husband Stephen and their daughters Gwendolyn and Emily. A celebration of life will be held at a later date; in the meantime, family and friends are asked to raise a glass in his memory.
Online condolence messages can be submitted at the Chad E. Poitras Cremation and Funeral Service website, www.mainefuneral.com
In lieu of flowers, donations can be made in his memory to the Michael J. Fox Foundation for Parkinson’s Research, PO Box 4777, New York, NY, 10163-4777.


Burial will be at Laurel Hill Cemetery.