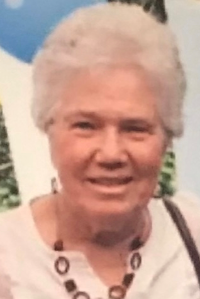 LIMINGTON- Dolores L. Harmon, age 88, of Limington Maine, a loving wife, mother and grandmother and great grandmother, passed away on December 26, 2020 at Maine Medical Center. She is now with her Savior, Jesus Christ and has been reunited with her husband of 42 years Edward “Sam” Harmon.
Born November 18, 1932, Dolores was the daughter of Kenneth and Manola Howard. She grew up in Limington with her two brothers Raymond and Wayne Howard along with her four sisters Sandra Devine, Elaine Dewitt, Gail Dibiase and Donna Howard. She attended Limington Academy. Dolores married Edward “Sam” Harmon on January 31, 1951. They had 3 children Cheryl Grass, Cindy Colello and Jeff Harmon.
Dolores worked as a seamstress at Cornish Dress Shop for several years. She did not leave her sewing skills behind. She enjoyed making crafts for her family as gifts and attending local craft fairs. She was always altering dresses and hemming pants for her children and grandchildren. Later she became a homemaker and a caregiver for her grandchildren. She enjoyed attending the grandchildren’s and great grandchildren’s school events, dance recitals, plays and sporting events.
Dolores loved having the entire family together at gatherings especially around Thanksgiving and Christmas. She would bake pies for days getting ready for Thanksgiving and was famous for her mini cheesecakes. Not only did she enjoy these family get togethers she also loved to take yearly vacations with all three children and seven grandchildren: whether it be a drive to Niagara Falls, camping at Little Ponderosa Campground or Acadia National Park.
Dolores was a member of the East Limington Baptist Church and the choir. She attended church faithfully and enjoyed singing in the Christmas Cantata. She made many lifelong friends at the church.
Dolores is predeceased by her parents Kenneth and Manola Howard, her brother Wayne Howard and sisters Sandra Devine and Donna Howard. She is also predeceased by her husband Edward Harmon and son-in-law Greg Grass. Most recently she was predeceased by her sister-in-law Gudrun Howard of Limington. Her sister-in-law Cheryl Howard of Waterboro passed two days after Dolores went to be with the Lord.
Surviving are her beautiful daughters, Cheryl Grass of Auburn, Massachusetts, Cindy Colello and husband Mauro Colello of Limington, Maine and her son Jeff Harmon and his wife Barbara of Ooltewah Tennessee; seven grandchildren, Jennifer Stevens and her husband Jeff of Auburn, Massachusetts, Jeff Harmon Jr of Hazlet, New Jersey, Stephanie Blundell and her husband Robert of Murrieta, California, Mandy Collins and her husband Chris of Limington, Maine, Carrie Monty and her husband Aaron of Knoxville, Tennessee, Chris Harmon and his fiancé Erikah Cashman of Charlotte, North Carolina and Ali Cesena of Huntersville, North Carolina; fourteen great grandchildren, Tori Wilcox, Alex Strafer, Jordan Monty, Nicholas and Nathaniel Strafer, Jasmine Collins, Vinny Blundell, Payton Monty, Julie Cesena, Nathan Collins, Oliver Cesena, Sam Harmon, Ava Collins and Silas Harmon; her brother Raymond Howard and sisters Elaine Dewitt and Gail DiBiase. Dolores “Aunt Dot” is also survived by many nieces and nephews that loved their Aunt Dot very much.
A graveside service will be held in the spring at North Limington Cemetery.
Online condolence messages can be submitted at the Poitras, Neal & York Funeral Home website, www.mainefuneral.com