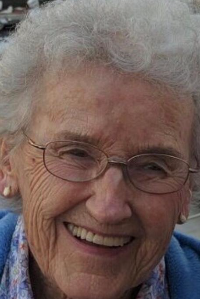 
Kennebunkport- Frances L. Hayes, 95,passed away at home on December 22, under the care of Hospice of Southern Maine. Born in Springfield, Ma on February 23, 1925, as a child Fran spent summers in Cape Porpoise at the Langsford House. She moved to the Greater Boston area in her early 20s, where she met and married her husband of 68 years, Norman. Together they raised 3 children in Bedford, MA, spending summers in Kennebunkport at the Wildwood Housekeeping Cottages on Wildes District Rd. The family eventually built a home just up the hill at number 134 and in 1980 moved to Kennebunkport permanently. Fran was a former member of the Newcomers Club, the River Tree Chorale, Good Cheer, the Seacoast Garden Club, and what was originally known as the Senior Center at Lower Village, where she learned to play bridge, making many friends over the weekly games. An avid walker, Fran always participated in the Center’s annual road race and at the age of 84 she won the 70+ women’s 3 mile race. For over 30 years Frances was a faithful twice-weekly volunteer at the Graves Memorial Library in Kennebunkport.

One of Fran’s greatest pleasures in life was singing with local a cappella group the Women of Note. A founding member in 1992, Fran formed strong and lasting bonds with her singing partners. The group was a particular favorite of the late President George HW Bush and his wife Barbara, and was asked to sing at Walkers Point on many occasions, in addition to being invited to sing at the White House of George W Bush during the 2007 Christmas season.

Frances was predeceased by her husband Norman. She is survived by her son Winthrop Hayes and daughter-in-law Maryann of Burlington, CT; daughter Nancy Hayes of Kennebunkport; daughter Ellen Hayes and son-in-law Marcus Poisson of Pawtucket, RI; grandchildren Winthrop and Mariel Hayes; sister Carol Robinson of Rockland, ME and various nieces and nephews. A celebration of Fran’s life will be held at a future date. In lieu of flowers donations may be made to the Graves Memorial Library PO
Box 391 Kennebunkport ME 04046. Online condolence messages may be submitted at Mainefuneral.com.