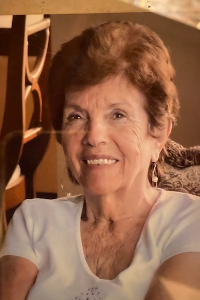 Bernadette A. (Sousa) Daigle, of Merrimack, NH passed away peacefully at 91 with family near at Villa Crest Nursing Home in Manchester, NH. She was the widow of the late Arthur Daigle who passed away unexpectedly at age 43.

She was born in Lowell, MA on December 3, 1929 and was a daughter of the late Anibal L. Sousa and the late Maria Filomena B. (Ce B Seixas) Sousa. She was raised in Lowell, where she attended the area schools. Bernadette was a devoted mother and cherished her time with her children and all children. After losing her husband she knew she had to continue her role as a mother, and expanded on this becoming a teachers' aid, working in Merrimack, NH. Working with kids made her feel like she was accomplishing something every day. She worked as a teacher's aide for over 10 years. Her hobbies included singing, dancing, playing bingo and the slot machines at Foxwood wherever it was offered. She was warm, energetic , very outgoing and loved spending time with family and friends.

WHILE FOLLOWING SOCIAL DISTANCING GUIDELINES AND WEARING A MASK, ALL ARE WELCOME TO ATTEND GATHER AND PAY THEIR RESPECTS ON, DECEMBER 23, 2020 AT 12 NOON AT THE MCDONOUGH FUNERAL HOME, 14 HIGHLAND STREET, LOWELL, 978-458-6816. HER COMMITTAL SERVICE WILL TAKE PLACE AT 1 P.M. AT ST. JOSEPH CEMETERY, 96 RIVERNECK ROAD, CHELMSFORD. THE COMMITTAL SERVICE WILL BE STREAMED LIVE ON THE MCDONOUGH FUNERAL HOME FACEBOOK PAGE.