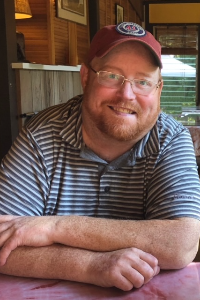 GILFORD - It is with heavy hearts that we announce the passing of Douglas Moyer, 46. Doug passed away peacefully Monday, December 14, 2020, with his loving family by his side at the Jack Byrne Center in Lebanon, NH.

Doug was born on September 28, 1974, in Laconia, NH. He grew up in Bristol, NH, and Gilford, NH. Always a team player, Doug spent his early years playing numerous sports and sharing time with his friends at the Tapply-Thompson Community Center. He graduated from Newfound Regional High School in 1992. Some of his fondest memories were those of times spent with his childhood friends.

Much of Doug’s life was spent in the kitchen, learning from mentors and in the later years inspiring beginning chefs. Starting from a young age, he worked as a dishwasher at the Pasquany Inn and later learned the ropes at The Millstream and Bristol House of Pizza. His culinary career included time at Lakes Region Greyhound Park, Gilford Steakhouse & BBQ (co-owner), Lobster Pound, Canoe, and Plum Crazy Pizza (co-owner). He is best known for his time as head chef at Abondante in Meredith, NH, where he specialized in traditional Tuscan cuisine. Over his career, Doug was featured in multiple publications including La Cucina Italiana magazine, and was invited to present at the Italian Culinary Institute in New York City, NY. In 2006, he traveled with the Italian Trade Commission to train with local chefs in Bari, Italy. Doug enjoyed the opportunity to cook for others and gather around the table to share a meal. He loved exploring new restaurants, writing recipes, planning family dinners, restaurant-hopping in the North End, and planning his next culinary adventure.

For 16 years, Doug fought a courageous battle with end-stage renal failure. His strength and determination to not let the challenges of this diagnosis deter him from his goals is the true indication of his resilient spirit. He faced each challenge with a thoughtful optimism, persevering even in his final days. The family would like to express their sincere appreciation to the doctors and medical staff at the Central New Hampshire Kidney Center, Lakes Region General Hospital, Dartmouth-Hitchcock Medical Center, and Jack Byrne Center. Doug found comfort and strength in the care and friendship he received from everyone during this time.

For those who wish, the family recommends memorial contributions in Doug’s name be made to the Blakeley-Mills Newfound Regional Scholarship Foundation, PO Box 691, Bristol, NH 03222, or the Tapply-Thompson Community Center, 30 North Main St., Bristol, NH 03222.

Due to the COVID-19 pandemic, a Celebration of Doug’s life will be held at a later date.