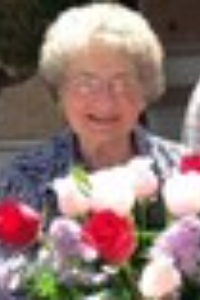 Ruby moved from Oklahoma with her family when she was 8 years old to Long Beach, California. She graduated from Long Beach Polytechnic High School in 1946. In 1949 Ruby married Tom Imgrund, a draftsman for Shell Oil Company. They continued to live in Long Beach. In 1952 their daughter Chris was born and shortly thereafter, Tom's career took them to Ely, Nevada, where their son Steve was born in 1956. Another transfer took the family to Seattle, Washington and then back to Long Beach, where Ruby was a Girl Scout leader. In 1963 Tom's career landed them in Ventura, where Ruby began working part time as a school lunchtime cashier, a job that evolved into working full time as an administrative assistant in the Ventura Unified School District office. For several years in the 1960s she was the

Ruby and Tom retired in their mid-50s. They took several ocean cruises and toured South Korea. They were married for over 61 years, until Tom's passing in 2010. Ruby was the Wooten and Imgrund families' historian. She could easily recall events dates and people's names going back to the 1800s and tell their stories. Chris taped butcher paper on Ruby's kitchen wall for her to record the family genealogy - and she did, including birth and death dates!

In lieu of flowers, memorial contributions may be made to the charity of your choice.