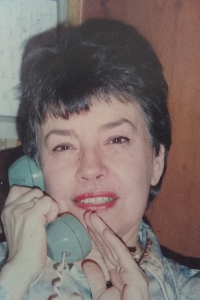 KENNEBUNK- Jean R (Knapp) Hansen, of Kennebunk, 90, passed peacefully at home with her family after a lengthy illness.

She was the daughter of William and Anna Knapp and was born in Meriden CT on July 28, 1930.

She married Roger Hansen of New Rochelle, New York in 1952 when she graduated from the Rhode Island School of Design with a bachelor’s degree in textile design. After moving around the country for 2 years when her husband was in the Army and she as an artist & draftswoman for the Civil Service, they settled in New Jersey for 12 years and her husband commuted into Manhattan. Both longed for a simpler life, and, inspired by summer vacations at Goose Rocks Beach, they moved to the Kennebunks in the 1960's.

A lucky break in 1968 led them to her home on the Mousam.

The beauty inspired Jean to write a number of poems and children’s stories, some of which were published in the Star.

As an athletic teenager she would occasionally get up before sunrise and school to help her father deliver bottled milk.

A resourceful New Englander, she taught herself how to bake, sew/make clothes, rent rooms, and worked in the hospitality business.

Her creativity really sprung to life in the 1980's - she wrote poems published in the Star;

Her interest and talent with food led to a thriving business; she made desserts for local restaurants (famous Chocolate Oblivion torte);

A two-time cancer survivor, possessed of a tough, can do and tell it like it is attitude, she also had a big heart for her kids and animals. If there was one thing she treasured it was her dogs. She met her first English pug in the 1970's and would go on to have three more over 50 years.

The family would like to Thank the truly amazing staff of Beacon Hospice, her son, Ward, and friends, all of whom allowed her to spend her final years safely at the home on the Mousam she so loved for 52 years.

Many thanks also to the late George Harrington and family, who sold her the house at a reduced price so that a large family could enjoy the property. And finally, the many Save the Mousam people who worked so hard to protect the river.

Jean was predeceased By Her parents William and Anna, and her ex-husband Roger in 1997.

She is survived by Her four children Keith, of Pinellas Park, FL; Lori of Ft. Lauderdale, FL; Ward of Kennebunk, and Tyler of Arundel.

Jean is also survived by four grandchildren and three great granddaughter who always made her eyes light up.

Donations in lieu of flowers can be made to Animal Welfare Society, PO Box 43, West Kennebunk.

A Celebration of her life will be held in the bright days of Spring.

Online condolence messages can be submitted at www.mainefuneral.com