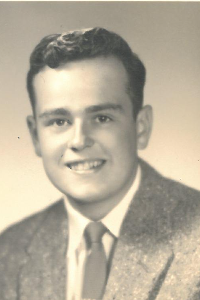 William worked as a pipe fitter for Lucent Technologies retiring in 1999. He married the love of his life, Jeannine (Hall) Lavin on February 4, 1961. He enjoyed hunting, fishing, boating and scuba diving in Lake Winnipesaukee.

William is survived by his loving wife Jeannine Lavin of Gilford; his son, Richard Lavin and his wife Nancy of Merrimac, MA; his daughter, Maureen Whitford and her husband Gordon of Newton; his brother John Lavin and his wife Patricia of Gilford; four grandchildren, Connor Whitford of Newton, Gina Whitford of Newton, Heidi Lavin of Haverhill, MA, and Cathy Lavin of Norfolk, VA; and one great-grandchild, Cheyenne Siguenza. In addition to his parents, William was predeceased by his brother John's twin brother, baby James Lavin.

A Graveside Service will be held in the spring.

The family asks that no one sends flowers. For those who wish, the family suggests that memorial donations be made in William’s memory to the Sacred Heart Church, c/o St. Andre Bessette Parish, 291 Union Ave, Laconia, NH, 03246.