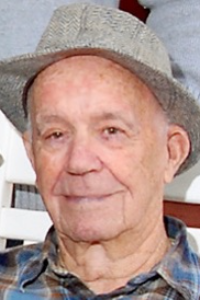 Alfred, Maine - Harry Wilbur Edwards, 92, of Alfred and formerly of South Hiram, succumbed after battling melanoma cancer on Sunday, December 7, 2020. The son of Wilbur Harry Edwards and Edith Sarah Smith of North Parsonsfield, he lived with his parents until he was drafted into the United States Army in 1952.

Prior to entering the Army, he married Beverly Jean Rogers of Brownfield, daughter of Archie and Gertrude Rogers. He spent many cold, lonely days and nights abroad in Korea thinking of his bride Beverly. He returned home to Maine after three years of the great struggles of war bearing down on him. He was awarded the Bronze Star, about which he never spoke but was very proud of, as well as being proud to serve his country.

He returned home and found work as a truck driver at Acme Concrete in Pepperell, Mass. With a young family on the way Harry wanted to be closer to home, so he began working with the State Highway Department working his way to being supervisor of many departments and garages of what would become the Maine State Department of Transportation. He managed the Route 25 highway corridor until his retirement after 33 years.

He was an avid outdoorsman and loved to hunt and fish with his buddies throughout his life. He was also an avid NASCAR fan and never missed a left hand turn on the track. Dad loved his friends and family and worked hard his entire life to support and be there for them all.

Due to the COVID virus a graveside service in Cornish will be announced in the Spring of 2021. Arrangements are respectfully handled by Poitras, Neal and York Funeral Home. Online condolences may be expressed at: www.mainefuneral.com

In lieu of flowers, please consider a donation to the Maine Veteran's Homes in Harry's name. Thank you and God Bless!