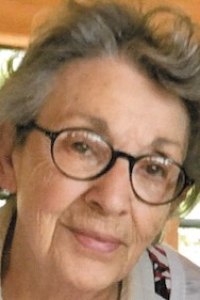 Born on June 22, 1925, as Loretta Rose Zirpolo in Revere, MA, she was the second daughter of the late James and Lillian (Morante) Zirpolo. She survived her sister, Evelyn Osterhaudt McDonald, by 5 years.

Loretta graduated from Everett High School in Everett, MA in 1943, and attended the Boston School of Dental Nursing to become an assistant dental hygienist.Later in life she obtained an Associate Degree in Human Services from NHTI in Concord, NH.

In 1950, she married Andre Talamas originally of Port au Prince, Haiti, where the couple lived for a few years and later settled in Westwood, MA, where they raised four children. She moved with her children to Lexington, MA, in 1966.

Loretta remarried in 1970, and moved to Gilford where she resided for 50 years. She worked as a teacher’s aide at Woodland Heights Elementary School, Laconia, NH, and until the age of 80 as a regular substitute teacher at Gilford High School.In 1975, she joined the Gilford Book Club and remained a member for 45 years.

Loretta is survived by three children, Andrea T. Castelli, Neal A. Talamas and Adrienne Y. Talamas, as well as five beloved grandchildren. In addition to her parents and her sister, Loretta was predeceased by a son, Glenn A. Talamas. She was devoted to her extended family and to her many friends and neighbors.

A Graveside Service was held by her family and friends on December 9, 2020, at Pine Grove Cemetery, Gilford, NH.

Contributions in her name may be made to The Friends of Gilford Public Library, 31 Potter Hill Rd., Gilford, NH, 03249.