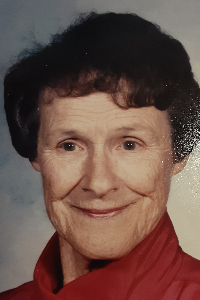 GILFORD--- Barbara Elizabeth Frink Hauck died peacefully at her home in Gilford, NH, at the age of 102 on December 10, 2020.

As a child Barbara enjoyed being at the family’s summer home on Odiorne’s Point in Rye, NH. The remaining stone structure, once part of their home, is now part of the Seacoast Science Center.

In 1941 she married her childhood sweetheart, William Hauck of Watertown, MA. With Bill away during the war, Barbara worked in the War Supply Office at the Portsmouth Shipyard. After her husband’s return from the war, the couple settled in the Lakes Region of NH where Barbara quickly became active in their new community and Church.

Barbara and her husband spent a full and happy life together for 60 years. They were active members of the Winnipesaukee Yacht Club, sailed their yawl “Survivor” on Lake Winnipesaukee and built a camp on Mark Island, which became a gathering place for family and friends.