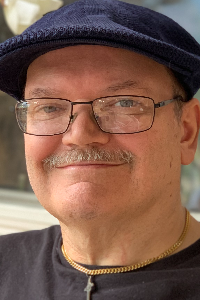 HOLLIS- Rodney was born on April 11th, 1969 in Bangor Maine. He was the eldest child of Paul J. and Joan E. Drake. Rod attended schools in Hampden and graduated from Hampden Academy in 1988. At the age of 13, Rodney suffered a head injury that would forever change his life. He struggled to get by each day, but he never gave up and always had the love and encouragement of his family to help throughout the years. After graduation from high school, Rodney attended rehabilitation programs at Maine Center for Integrated Rehab in Brewer and Goodwill Neuro Rehab in Scarborough.
To fill the hours during the day, Rodney spent a lot of time playing solitaire, loved a good game of cribbage and enjoyed many TV programs. Rod would not pass up the opportunity to watch a good sport game, especially football, baseball and hockey. He followed games played by the Red Sox, New England Patriots and the University of Maine. In the summers, when they had their pool, he would spend all day swimming. Rodney also loved traveling with his family to many special places, his favorite was Las Vegas.
Rodney had two passions in life. One was his collection of playing cards that numbered well over twenty five hundred decks. His collection contains cards from all over the USA and Europe, new, old, loved and or worn, he loved them all. He was always excited when his sister returned from a trip to see if she had new decks to add to his collection and again on Christmas morning to see how many awaited him.
Rodney’s other passion in life was music. He was an avid “Beatles” fan. He owned and listened to many of their records, collected their memorabilia and loved a good Beatles tee-shirt. The highlight of his life was when his sister took him to see Ringo Starr perform in Bangor.
Rodney is survived by his mother, Joan Drake, his younger sister Becky A. Drake and sister-in-law Samantha, his nieces and nephew Alexia, Coli, and Konnor. He is predeceased by his father Paul Drake (April, 2020), his maternal and paternal grandparents, and many aunts and uncles.
At the request of the family, there will be no funeral or viewing service.. In lieu of flowers, please make a donation to The Brain Injury Association of America Maine Chapter or a charity of your choosing.