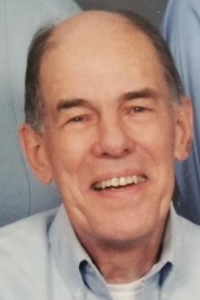 Frank was born in 1933 in Claremont, NH the son of the late Myron and Charlotte (Colburn) Quimby. He was a graduate of Stevens High School in Claremont.

Frank left the family farm to serve in the US Army in Alaska. Following his military service he became a Master Electrician and a Radio and Television repairman. After 30 years of service as a Postal Carrier and Clerk in Laconia, he retired from the Postal Service and continued his electrical work with M&E Manufacturing in Laconia. He was a volunteer Firefighter for the Gilford Fire Department for 20 years, a past member of the Gilford Zoning Board and Gilford Old Home Day Chairman.

For 35 years he served as the Electrician for the Cornish, NH Fair, where he and his family returned every August to support the great Cornish tradition. During our nation's bi-centennial celebration he was selected as New Hampshire's representative to re-enact Washington's crossing of the Delaware River. As a member of Central NH Amateur Radio club and past Treasurer of Lakes Region Repeater Association, his call sign was N1MAZ.

Frank is survived by his wife of 59 years, Cecily (Ballou) Quimby; his daughter, Karen Craver and her husband, Jim; his son, Howard Quimby and his wife, Karen; four grandchildren, Benjamin, Perry, Nicole, and Krista; and two sisters, Marilyn Wallace and Beverly Muse.

The family would like to express their sincere appreciation to the medical and administrative staff of the NH Veterans Home for their excellent care of Frank and all the Veterans who remain in their care.

A Graveside Service will be held on Friday, December 4, 2020 at 3:00pm at the Child Cemetery in Cornish, NH.

In lieu of flowers, donations in Frank’s memory may be made to the NH Veteran’s Home, 139 Winter Street, Tilton, NH 03276.

Wilkinson-Beane-Simoneau-Paquette Funeral Home & Cremation Services, 164 Pleasant Street, Laconia, NH, is assisting the family with the arrangements. For more information and to view an online memorial go to www.wilkinsonbeane.com.