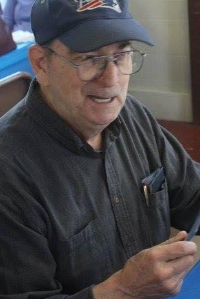 CORNISH – Paul Kenneth Smith, Sr., age 83, passed away on November 19, 2020 at Gosnell Memorial Hospice House due to complications from pneumonia.
He was born in Portland, Maine on December 29, 1936 the son of the late Everett Rudolph Smith, Sr. And Etta Mae (Johnson) Smith. He obtained in GED at Portland High School. He enlisted in the Air Force during the Korean War to fight for his country and received an Honorable Discharge due to medical issues.
On September 24, 1965 he married the love of his life, Sharon Lee Fowler. They enjoyed 55 years of marriage together, enjoying many laughs as well as tough times. They were both members of the American Legion Post #197 in Westbrook, Maine.
For 35 years Paul worked for the phone company, starting out as a janitor, working his way to lineman, and eventually to installer. He put in many poles and lines in the Hiram, South Hiram, and Kezar Falls areas. He traveled many times out of state to assist with line repairs in storm damaged areas.
He was predeceased by his two sons, Paul Kenneth Smith, Jr. (August 19, 2015) and Shawn Everett Smith, I (May 12, 2013) and by his grandson, Peter Aaron Pinkham (January 10, 2009). He was predeceased by his sisters Katherine Connolly, Barbara Smith, Dorothy Smith, Wilma Springer, Patricia Warren and by his brothers James Smith, Robert Smith, Richard Smith, Everett R. Smith, Jr.
He is survived by his loving wife Sharon Lee Smith of Cornish; his daughters Margaret A. Troisi (Chuck) of Newfield, Katrina M. Lowell (Norman) of Limington and Dawn L. Martell (Raymond, Jr.) of Limington; 11 grandchildren: Joshua, Jonathan, Kera, Christopher and Tayla Smith; Nakita Nevers; Samantha Smith; Shawn Smith, II (Sarai); Courtney Smith; Orrin Fende and Mackenzie Reddy (Joseph) and 15 great-grandchildren: Aaliyah and Emily Pinkham; Benjamin, Natalie and Griffin Smith; Jensen and Genevieve Smith; Sophia and Lauren Smith; Thomas Davis, Emiliah and Taydon Donaldson; Brian Smith; Shawna Brown and Levi Smith.
He was a long-time member of the Maine Country Music Association and past-President. He enjoyed going to country music shows with his family and was often a guest singer for many of the bands. He enjoyed dancing. Family was his everything and he loved any time that his family had a gathering and was the life of the party. Christmas was his favorite time of year and his love of Christmas lights showed on the tree every year and eventually spilling over into his front yard in Cornish.
Visitation will take place at 11:00 a.m – 12:00 pm. on November 28, 2020 at Poitras, Neal & York Funeral Home, 71 Maple Street, Cornish, Maine with his funeral service for immediate family to follow at 12:00 p.m. Please be mindful of COVID restrictions and mask wearing. Online condolence messages can be submitted at www.mainefuneral.com

In lieu of flowers, memorial contributions can be made to the Alzheimer's Association, www.alz.org, in
memory of Paul Sr.