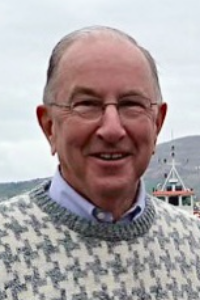 Bill lived in Dartmouth nearly all his life and was a graduate of Dartmouth High School and New Bedford Institute of Technology, now The University of Massachusetts Dartmouth, with a Bachelor of Science in Business Administration. He was co-founder and President of Northeast Folding Box, Inc. in New Bedford and spent many years in the folding carton and packaging industry.

Bill had the honor and privilege of serving Dartmouth in several capacities, beginning in 1968 as a member of Town Meeting, the Housing Authority, and the Planning Board. He served as Town Clerk and Treasurer from 1980 to 1986 and as Selectman from 1989 to 1993.

In addition to his wife, Mary, he is survived by his son, William F. and his wife Stephanie of Nashua, NH; his son, John P. and his wife Kelley of New Bedford, MA; his daughter, Anne Marie Labonte and her husband Gene of Deep River, CT; his son, Peter C. and his wife Lynne of Berlin, MA; his son, Christopher J. and his wife Patricia of Rye, NY; and his daughter-in-law, Viki Ots Mosher. He was the grandfather of the late Ian Mosher, and leaves 12 grandchildren: Katherine Labonte, Patrick Mosher, David Labonte, Sean Mosher, Gabrielle Mosher, Owen Mosher, Allison Mosher, Meaghan Driscoll Mosher, Samuel Mosher, Thomas Mosher, and twins Michael and Sarah Mosher. He is survived by his brother Francis of Satellite Beach, FL, and his sister Kathleen German of Franklin, TN. He was the brother of the late Michael H. Mosher and Donald G. Mosher.

The family wishes to thank the entire staff of Autumn Glen at Dartmouth. The administrators, dining room staff, maintenance staff, activities personnel, nurses, CNAs, and everyone were incredibly supportive, caring, helpful, kind, and loving during his final years. A special thanks to Chad MacLeod for his many years of service and friendship.

It was his wish to donate his body to Harvard Medical School, but that was not possible due to the pandemic. Instead, Bill will be cremated and a celebration of life will be held when it is possible after the current public health crisis. Donations in Bill's memory may be made in his name to one’s favorite children’s charity. The family would appreciate notes of remembrance, stories, and photos be sent to Mary Mosher c/o Saunders-Dwyer Home for Funerals, 495 Park St., New Bedford, MA 02740, so that they can be read and shared at the celebration of life. For online guestbook, visit www.saundersdwyer.com.