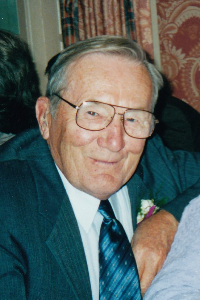 He leaves his wife of 69 years, Charlotte J. (Kondek) Carpick; his sister-in-law and brother-in-law, Genevieve and William Pioppi of Sturbridge; several nephews and nieces; and his wonderful neighbors. He was preceded in death by 2 sisters, Alfreda Simonis and Joan King.

He was born on May 12, 1926 in Southbridge, the oldest child of Walter and Catherine (Urban) Carpick. He graduated from Cole Trade High School in Southbridge in 1946. He had lived in Dudley since his marriage in 1951.

He was a Navy veteran of World War II, serving as a machinist’s mate on the destroyer USS Dyess..

Mr. Carpick first worked at H. U. Bail Company in Southbridge from 1948 until 1960. He then was a mason for Local #243 of the Laborer Union of America for 30 years before retiring in 1988.
He was a communicant of Saint Andrew Bobola Church. He was a charter member of Local #243.

His funeral Mass will be held on Tuesday, November 24, at 11:00 AM in Saint Andrew Bobola Church, 54 West Main Street (please meet at the church). Burial will be in Saint Joseph Garden of Peace, Webster. Visitation will be held privately. Covid-19 guidelines will be in place and everyone is asked to wear a mask. A celebration of his life will be held when it is considered safe. Donations in his name may be made to either Saint Joseph School, 47 Whitcomb Street, Webster, MA 01570 or to St. Andrew Bobola Church, 54 West Main St., Dudley, MA 01571. Arrangements are under the direction of Sitkowski, Malboeuf & Hickey Funeral Home, 340 School Street, Webster.