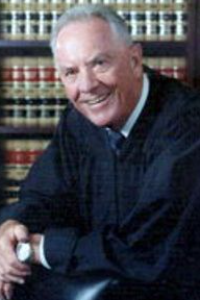 Paul Hiram Coffee, 88, Ventura, California, passed away comfortably at home surrounded by family, on November 19, 2020. Paul was born in Madera, CA, to Everett and Mildred Coffee on July 10,1932. Paul spent six years in the navy as a naval aviator. He earned a Juris Doctorate degree from Bolt Hall School of Law in 1962. After practicing insurance defense law in both San Jose and San Luis Obispo, he was appointed to the Superior Court of San Luis County in 1992, and was elevated to the California Court of Appeal in 1997. While in the practice of law he was elected to the American Board of Trial Advocates in 1982 and became president of the tri-counties chapter in 1989. Paul also served as president of the Association of Defense Counsel of Northern California in 1989.

Paul was an avid sailor and loved living aboard his 42’ sail boat in Ventura Harbor with his partner of 20 years, Elizabeth Kinney. They were long time subscribers and fans of the Rubicon Theater. Paul is survived by his daughter Lisa Boucher, her husband Dan and granddaughter Alyssa, 15, of Brisbane, CA; his daughter Marisa Bello, her husband Ryan and grandchildren Caia, 26, Keilan, 21, and Elle, 15, of San Luis Obispo. He is also survived by his loving partner Elizabeth and her son David, daughter Barbara, grandchildren Matt, Steve, Angelo, Marina, Carley and great granddaughter Autumn Moon.

In lieu of flowers memorial donations may be made to Our Lady of the Assumption Catholic Church, 3175 Telegraph Rd, Ventura, CA 93003; or, City of Hope Cancer Research Hospital, 1500 Duarte Rd, Duarte, Ca 91010.

The family wishes to thank all of the medical professionals who took such loving care of him, and the staff of Assisted Healthcare Services who provided support and hospice care.

A private internment will take place at Santa Clara Cemetery. A memorial service will be held once the COVID restrictions have been released and we can gather together to celebrate his great life. Arrangements are under the direction of the JOSEPH P. REARDON FUNERAL HOME & CREMATION SERVICE, Ventura.