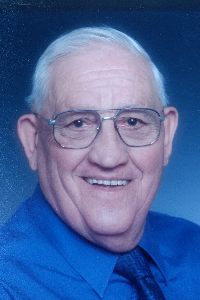 Sebago - Llewellyn A. Garland of Sebago went home to Jesus on October 28, 2020 at Springbrook Center in Westbrook of natural causes and old age, as he was 90 years old. Lew was born on January 15, 1930 to a family of 14 children. He attended local schools and started working at an early age at a dairy farm and in the lumber industry.

He enlisted in the United States Army in 1952 and received an honorable discharge in 1956. He was a master mechanic and managed several Sunoco stations, worked at the Limerick Mill and drove truck for a lumber yard. Later in life he worked for Hannoford's in Standish in the maintenance department and as a grocery bagger.

Lew enjoyed fishing, gardening, word searches, game shows and different kinds of music. His passion was tinkering on cars. He attended both Nazarene and Baptist churches during his lifetime, his last home church being Hilltop Baptist in Cornish.

He married Jean A. Douglass on January 15, 1953 and they were together for 11 years with their two daughters, Cynthia and Bonnie. They were divorced and apart until 1992 when they were remarried and resumed living in Sebago. During their time apart Lew moved to Massachusetts where he met and married Patricia Remick, a widow with three children. They were together for 22 years and raised their family until her death in 1991.

He is survived by his wife, Jean D. Garland and their daughters Cynthia Caron of California and Bonnie and Timothy Berry of Colorado. His daughter Marsha and William Hughes, and his son Robert and Cathy Remick of Mass. His two sisters-in-law, Cleo Garland and Sylvia Douglass. Also his grandchildren: Matthew and Christy Caron, Bryan and Nella Caron, Anjonette Caron, Annalee Berry, Aaron Berry, Alisha and Manuel Madrid, Thomas, Erin, Brianne and Megan Hughes, Jennifer and Barry Evers, and Katherine and Stephen Remick. Great grandchildren: Jacob, Seth, Ethan and Joel Caron, Alina Berry, Pacha, Brelle and Micah Madrid, Kailey and Jake Evers, and Jackson Remick. His nieces, Shirin Garland of Parsonsfield with her children, Desirae and Tyler Lyle, Damon and Erin Jordan of Casco with their families. Carol Garland and her family, Nora and Eric Caruso. His nephews: Albert "Chuck" Garland Jr. and his family, and Sherill and Debbie Douglas Jr., as well as a large extended family.

In lieu of flowers, please consider a donation to: Hilltop Baptist Church in Cornish or the Animal Refuge League in Westbrook.