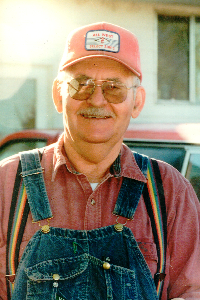 Milton C. Russell, age 88 of Prosser, entered into rest on October 12, 2020 at Prosser Memorial Hospital. He was born in Conrad, Montana and was raised and educated in Dayton, Washington and graduated from Dayton High School with the class of 1949. In 1951 he enlisted in the US Army and was stationed in Germany and Poland. After his discharge in 1954 he lived in Ritzville and worked on the Spencer Ranch. In the late fifties he married his first wife, Norma, and they had three children. They moved to Pullman, Washington where Milton went to work for the Animal Science Department at WSU.
On December 30, 1978, Milton and Colleen Rogers were married in Bellingham, Washington. In 1983 the couple moved to Prosser where he worked at the WSU Experiment Station as Herd’s Manager and was Washington Cattleman’s Association Bull Test Manager until his retirement.
Milton was a member of Washington and Idaho Wool Growers, Washington Cattleman’s Association, and past President of the Benton County Cattleman’s Association. He was proud to be the first registered Black Hereford breeder in Washington State. He was also a member of the NRA and VFW. He enjoyed farming, antique tractors, and his many grandchildren.
Milton is survived by his wife, Colleen of Prosser; his children, Pamela Sue Stice (Mike) of Pullman, Vickie Lynn Holzmiller (Vincent) of Otis Orchards, Washington, Monte James Russell (Shelly) of Renton, Washington, Conrad Russell (Desiree) of Prosser and Chelsea Schilperoort (Gerrit) of Sunnyside; thirteen grandchildren; five great grandchildren; and numerous nieces and nephews.
He was preceded in death by three brothers, four sisters and his parents.
A Celebration of Life and potluck will be held at 22236 North Hinzerling Road on Saturday, October 24th at 1:00 p.m. Full Military Honors will be provided by members of the Lower Valley Honor Guard. You may share a memory or leave a message for the family at www.Prosserfuneralhome.com