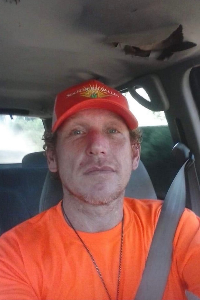 Ronald “Steven” Golden, 43, of Omega, passed away Wednesday, October 21, 2020, at South Georgia Medical Center in Valdosta. His funeral service will be held at 2:00 p.m. Sunday, October 25, 2020, in the Chapel of Bowen-Donaldson Home for Funerals. Mr. Golden will be laid to rest at a later date.

Born June 28, 1977 in Tifton, Mr. Golden was the son of Ronnie Otis Golden of Tifton and the late Glynda Fletcher Golden. He was the owner and operator of Golden Touch Roofing and he was of the Primitive Baptist faith. He was a loving father, grandfather and brother. He loved dogs and the outdoors.

In addition to his father, Mr. Golden is survived by one son, Steven B. Golden of Tifton; two daughters, Sara Golden of Tifton and Haley Grace Golden of Nashville; two brothers and one sister-in-law, Brad and Rena Golden and Jamie Golden, all of Tifton; one sister, Stephanie Scarbor of Tifton; two grandchildren, Paisley Noel Golden and Steven Ray Golden; and his nieces and nephews, Austin Cooper, Michael Golden, Kaleb Golden, Megan Scarbor, Kayla Griffin and Kagen Moore.