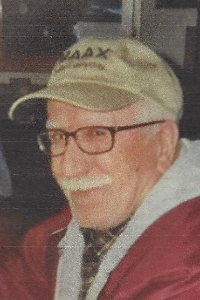 Richard W. Davidson, age 85, recently of Porter, Maine, a former longtime resident of Hyannis and Taunton, passed away peacefully on Thursday. October 22, 2020 at the Merriman House in North Conway, New Hampshire. He was the beloved husband of the late Carol Jean (Merkman) Davidson, to whom he was wed for twenty-three years at the time of her death on March 16, 2008.

Born in Taunton, MA on January 3, 1935, he was a loving son of the late Lynwood and Ethel (Schofield) Davidson.

Richard grew up in Taunton and was a graduate of Taunton High School. Prior to retiring, he worked for many years as a self-employed building contractor, specializing in home renovations. he served for six years in the National Guard and while living in Hyannis, had attended the Federated Church.

Mr. Davidson was a longtime member and Past Master of King David Lodge A.F. & A.M. in Taunton, the Hyannis Lodge of Elks, and was a former member of the Taunton Kiwanis Club and the Taunton Gun Club. He was truly a civic minded man who donated much of his time helping others. His hobbies included being outdoors, hunting, fishing and was also an avid football fan.

He is survived by his devoted children: Lynn Kelly and her husband Thomas of Porter, Maine, Robbyn Bradner of Palm Bay, Florida, Avis Bradley of Florida, Allison Merkman of Massachusetts, Troy Merkman of Massachusetts, Jason Merkman and his wife Tracy of Massachusetts and the late Tracey Vargas. He was the dear brother of Alan Davidson of South Carolina and the late Amalie Findlay. He was the cherished grandfather of Michael Moscuzza and Daniel Bradner and is also survived by several great grandchildren.

Relatives and friends are cordially invited to attend a graveside funeral service, conducted by King David Lodge, on Tuesday, October27th at 1:30 P.M. at the Mayflower Hill Cemetery in Taunton.

Visiting hours are omitted and those wishing, may remember Richard with a donation in his memory made to King David Lodge, 66 Winthrop Street, Taunton, MA 02780.

Arrangements are under the care and direction of the Taunton Memorial Funeral Home, 8 Crapo Street, Taunton.

To send his family a message of condolence, please visit www.tauntonfuneral.com