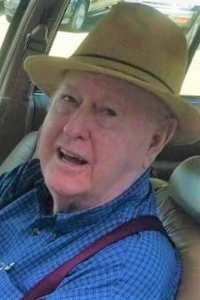 Funeral services will be held 11 AM, Saturday, October 24, 2020, at The Paulk Funeral Home Chapel in Fitzgerald, with the Rev. Dr. Lloyd Stembridge officiating. Interment will follow in Evergreen Cemetery. The family will receive friends one hour prior to the service at the funeral home on Saturday.

Mr. Whitley was born April 6, 1928, in Irwin County, Georgia, to the late Bates & Mary Stephens Whitley. He was a car salesman for many years working for Stone Motor Company and Fitzgerald Ford. He also owned and operated Southside Motors for many years. His hobby was buying and selling…anything. He was the oldest living member and a Past Master of Pine Level Lodge #353 F.&A.M. “Bro. Buck” became a Mason in 1953 and was honored as Mason of the Year in 2015. He served many years as Director of Work for the Lodge and mentored many men in their Masonic journeys. He was a member of Arbor Baptist Church.