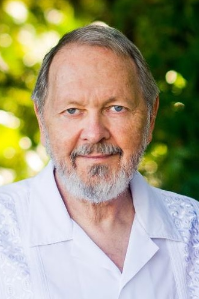 John Lee Ackerman was born in Warren Ohio May 9, 1948. He passed away October 18, 2020 after an extended illness. He is survived by his wife of 44 years, Jodelle Gross Ackerman, and two daughters, Jacqueline Esther Ackerman and Jessica Lee Ackerman, as well as brother Dale Ackerman and sister Caroline Ackerman.
John was preceded in death by his parents, Leslie Lee Ackerman and Mary Lyon Ackerman, sister Ruth Eileen Ackerman and sister Thelma Lucille Ackerman.
John grew up in Newton Falls, Ohio, where he and his family were active in the First Church of God. He played varsity baseball at Newton Falls High School. After high school John joined the Air Force, serving in Florida, Germany, and Vietnam as a radio operator. During this time he confirmed his walk with Christ and was active in lay ministry. He was also inspired, through his sister Caroline, to go into medical missions. After his term of service, he entered Anderson College. He majored in biology, and was the very first nursing graduate in that first class. John had hoped to go to Kenya to serve with his sister, but the government wanted more education, so he went back to school. He eventually finished a BS in nursing from Marian College of Indianapolis, as well as some graduate work.
John married Jodelle (Jodie) Gross in 1976. They have been blessed with two wonderful daughters, Jacqueline and Jessica. John’s dream was to serve in medical missions, and that dream was realized in January 1986, when the family moved to Haiti to serve under Church of God Ministries. John served the Haitian people in the countryside where there was very little health care provision. After attending language school to learn Haitian Creole, John began working in several local Church of God congregations. He did primary health care clinics and some health care education. In those early days he worked with an interpreter and a pile of reference books, including "Where There is No Doctor." He saw many things that a US education had not prepared him for. But as time progressed, he learned Creole better and how to treat the tropical diseases and other advanced health issues he saw, as well as places to send the cases he could not treat.
In a country where life is difficult and the missionary turnover is high, John was determined to stay for the long term, and he gained credibility with the Haitian people. Among other things, he assisted with the education of the pastor's daughter in Prospere, who became his assistant in the clinic there. He helped with medical questions and treatment for many expatriate friends, and was willing to work with other missions and groups. This was especially true after the Earthquake in January of 2010, when he helped in a temporary field hospital set up by friends in another organization.
John loved his family dearly, and he extended that love to others who became like family. He loved to talk and get to know others at the deepest level. He enjoyed photography, tennis, and scuba diving. He always loved music and singing in the sanctuary choir at Park Place Church of God.
During the 30 years the Ackermans lived in Haiti, they experienced many difficulties, as well as great beauty, fulfillment, and lasting friendships. John and Jodie returned to Indiana for retirement in 2016.
Funeral services will be private, by Rozelle-Johnson, with burial at Maplewood Cemetery. Memorial contributions may be given to Mission Haiti Medical through http://missionhaitimedical.org/giving/. Here is a link to view his service https://www.youtube.com/channel/UCbfdgI3VCohuG8U4NJUGUVw