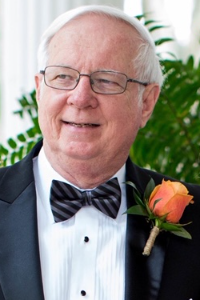 Funeral services will be held 2 PM, Sunday, October 18, 2020, at First Baptist Church in Fitzgerald, with the Rev. Blane Jacobs officiating. Interment will follow in Evergreen Cemetery. The family will receive friends from 5-7 on Saturday evening under the breezeway at First Baptist Church. Due to COVID-19, friends are respectfully requested to wear face coverings and to observe social distancing.

Mr. Hill was born April 4, 1950, in Fitzgerald, Georgia, to the late Wiley Edward & Kathryn Eugenia Ross Hill. He was a 1968 graduate of Fitzgerald High School where he was a member of the Debate team and was a Marching Cane. He played in the Redcoat Marching Band while at the University of Georgia and graduated in 1974 as a Registered Pharmacist. He began his pharmacy career at the state hospital in Thomasville, Georgia. He moved to Daytona Beach, Florida and began working for Eckerd Drugs later transferring to Albany, Georgia. In 1980, he purchased Dr. Quincy Gilleland’s business shortly after his twin brother Ed purchased Dr. Ray Barfield’s business. They merged the two into Hill’s Pharmacy and would spend the next 40 years together as entrepreneurs and business partners. Together they owned the pharmacy and the True Value Hardware Store. After their sale to Revco and later CVS, Arthur served as the Director of Pharmacy at Dorminy Medical Center for 20 years. He was also a graduate of Georgia Military Institute and commissioned a 2nd Lieutenant in the Georgia Army National Guard. He served his country honorably and ended his service as a Captain. He was a former Kiwanian and was a member of the Rotary Club of Fitzgerald. Mr. Hill was a lifelong member of First Baptist Church where he was a Deacon, trumpeter in the Orchestra, and a member of the Sportsman’s Sunday school class.

He is survived by his wife of 45 years, Judy R. Hill of Fitzgerald; children: Marcus Hill & David Quist of Atlanta, Ashley Hill of Athens, and Emily Hill Case & Cory Case of Johns Creek; a granddaughter, Charlotte Maren Case; and brother and sister-in-law, Ed & Becky Hill of Fitzgerald. Several nieces and nephews also survive. In addition to his parents, he was preceded in death by a sister, Kay Hill Adams.