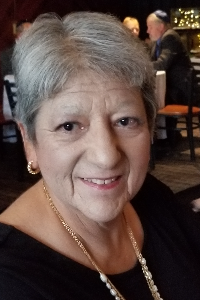 On Wednesday, October 7, 2020, Barbara Joan Kegeles, beloved wife, mother and friend passed away. She fought hard for many years from Diabetes, Hemo and Peritoneal Dialysis, glaucoma, Nephrogenic Systemic Fibrosis, high blood pressure and in the last few years being legally blind.
Born March 31, 1951, in New Haven, Connecticut, to the late Abraham Paul Cohen and the late Ann (Chidekel) Cohen of Hamden, Connecticut.. During her early years, she spent several years in and out of the hospital with heart issues. Barbara’s first husband was the late Jeffrey Nathan of New York and they spent their married life in Hamden. During their marriage Barbara and Jeffrey adopted a baby, Pamela Nathan. Barbara & Jeffrey divorced in 1991, but Jeffrey passed away in 1992. In 1996, after reconnecting with her high school sweetheart, Barbara, married Howard Kegeles. Barbara graduated Hamden High School in 1969 and in 2019 attended with her husband Howard Kegeles, also a 1969 Hamden graduate, their 50th High School Reunion. She received her Associate Degree and worked as an assistant to her brother, the late Dr. Barry Cohen, a chiropractor in Woodbridge and East Haven, CT. She also worked as a Customer Service Representative at MD Health Plan in North Haven, CT before reconnecting with her current husband. In 1997 the family moved to Oxnard, CA. Barbara worked as a Customer Service Rep and then Grievance & Appeals Coordinator at Aetna Insurance, until she advanced to Walgreens Option Care (formerly Home Pharmacy), where she stayed until 2009, when her kidneys failed, needed dialysis and became disabled.
Barbara loved the ocean and the shoreline and always lived nearby or within a short drive. She loved to travel and with her husband, Howard, in 2006 went on her dream vacation for their 10th anniversary, to Oahu and Maui.They also spent many vacations in Laughlin and Las Vegas.
Singing was a passion for Barbara as she had an all girl band in her late teens to help pay for college. She loved the Beatles and saw them at Shea Stadium in 1969. Barbara also doted on her canine companion, Gracie (aka Goobie) until her passing over the rainbow bridge on March 23, 2020.
Barbara was predeceased by her parents and her brother, the late Dr Barry Cohen of Hamden, CT. She is survived by her husband of 24 years, Howard Kegeles of Oxnard, CA; daughter, Pamela Nathan of Oxnard, CA; brother-in-law, William Kegeles of North Haven, CT; niece Kim Olin (Michael) of Framingham, MA; nephew, Adam Cohen (Andrea Jill) of Hadden Heights, NJ; cousin, Iris Linner (Abe) of Manchester, CT, childhood friend, Nancy Mirto of Hamden, CT as well as many friends. We will all miss Barbara.
Due to the pandemic, there will be no service for Barbara at this time. Once there is better control of the pandemic, there will be a small memorial at sea in celebration of her life. Condolences can be made on the website of Joseph P Reardon Funeral Home at www. reardonfuneral.com. Donations can be made to the organization of your choice in Barbara’s memory.
Private arrangements are under the direction of the JOSEPH P. REARDON FUNERAL HOME & CREMATION SERVICE, Ventura.