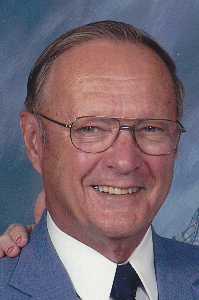 Leo was born October 27, 1933, in Alexandria, the son of Orville and Ruby (Rolland) Conwell. He was a 1952 graduate of Frankton High School and served in the Army National Guard for eight years.

Leo was employed by Delco Remy as a production supervisor working 37 1/2 years before retiring December 31, 1986. He owned and operated Triple A Bail Bonding Service. Leo was a member of St. Ambrose Catholic Church; the Elks Lodge; Moose Lodge, Eagles Lodge; Knights of Columbus and American Legion. He enjoyed golfing, fishing and truck shows and taking flying lessons, learning to fly his own plane. He believed in hard work and it paid off.

Leo was preceded in death by his parents, a sister, Judy Karen Reily and three grandchildren; Bryan Kempher, Courtney Kempher and Kyle Kempher.

A private Mass of Christian Burial will be held on Monday, October 5, 2020 at St. Ambrose Catholic Church. Burial will follow at East Maplewood Cemetery.

Memorial contributions may be made to St. Jude's Children's Hospital.

The family is grateful for the kindness and consideration of the neighbors and extend a special thank you to Susie and Dave Hoffer for their compassion and help during this difficult time.