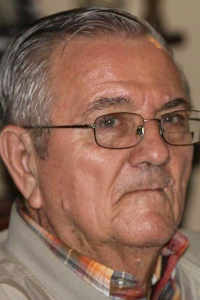 John Dalton Hayes, 88, of Tifton passed away Sunday, September 27, 2020, at the Rehabilitation Center of South Georgia in Tifton. A graveside funeral service will be held for Mr. Hayes at 3:00 p.m. Thursday, October 1, 2020, at Oak Ridge Cemetery, where he will be laid to rest. The family will receive friends on Thursday, October 1, 2020, at Oak Ridge Cemetery from 2:00 p.m. until the hour of the service.

Born October 29, 1931 in Berrien County, Mr. Hayes was the son of the late Earnest Hayes and Cassie Roberts Hayes. He was also preceded in death by one brother, Floyd Hayes; and one sister, Ruby Tucker. Before retiring, he was the assistant street superintendent for the City of Tifton and managed the Tift County Landfill. He was a veteran of the United States Army and of the Baptist Faith.

Mr. Hayes is survived by one son and daughter-in-law, Dewayne and Chrissy Hayes of Fitzgerald; two daughters and sons-in-law, Darlene and David Swett and Debbie and Don Chapman, all of Tifton; ten grandchildren; and seventeen great-grandchildren.