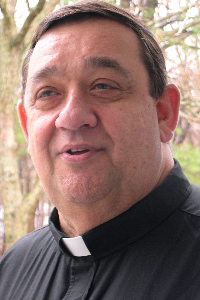 Besides his brother Assumptionists, he leaves a niece, Gina Carbone of Danielson, CT. He was preceded in death by his sister Arlene Carbone.

He was born on March 15, 1942 in Willimantic, CT and raised in Danielson, CT, the son of Vincent J. and Mary Lena (Dandeneau) Espinosa. He graduated from Assumption Preparatory School in Worcester and then from Assumption College (now University) also in Worcester. He studied Theology at the Assumptionist House of Studies in Layrac, France, at Saint Gerard in Belgium and at the Weston School of Theology. He completed courses at Harvard Divinity School and earned a Master’s Degree from Boston College in Divinity and Religious Studies.

He pronounced his first vows on August 28, 1963 at the Assumptionist novitiate in Saugerties, NY and was ordained to the priesthood on August 21, 1971 at Assumption College by Bishop Bernard J. Flanagan.

His ministry began as a teacher at Assumption Preparatory School from 1969-1970 and at Madonna High School in Weirton, WV from 1970-1976. He was named Director of Campus Ministry at Assumption College where he served until 1981. He served as the provincial treasurer from 1981 to 1989. He then became pastor of Saint Anne and Saint Patrick Parish in Fiskdale from 1992 to 2001. He was named Director of Development at the Assumptionist Center in Brighton, a position he held from 2004 to 2016.

Father Espinosa was instrumental in establishing the residency program for graduate students and young professionals at the Assumptionist Center in Brighton. He was a strong advocate of the Assumptionist Lay-Religious Alliance. He provided encouragement for young religious in their formation years.

His funeral will be held on Tuesday, September 29 at 10:00 at the outdoor pavilion of Saint Anne and Saint Patrick Church, 16 Church Street, Fiskdale, with the Very Reverend Dennis M. Gallagher, A.A., Provincial Superior, as the main celebrant. Burial will be in Saint Anne’s Cemetery, Sturbridge. A time of visitation will be held from 9:00 to 10:00 AM at the outdoor pavilion, prior to the Mass. Covid 19 precautions will be followed. Donations in his name may be made to the Assumptionists, 330 Market Street, Brighton, MA 02135. Arrangements are under the direction of Sitkowski, Malboeuf & Hickey Funeral Home, 340 School Street, Webster.