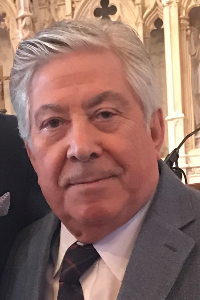 Antonio "Tony" Conte (81) of Lillian Road in Johnston passed away at home on Friday, September 18, 2020, surrounded by his family. He was the husband of Maria (Santonastaso) Conte. They had been married for 56 years.

Tony was born in Pietramelara, Italy, a son of the late Pasquale and Giovanna (DiPalma) Conte. After graduating from school, he served in the Italian Army and was honorably discharged as a sergeant. He trained as a tailor, graduating from apprentice to Master while in Italy.

Growing up in post-war Italy, he was enamored of all things American, even driving a delivery truck for the ultimate in Americana, Coca-Cola. He emigrated to the United States in 1964, proudly referring to October 4 as his "American birthday." He and Maria lived in Providence before settling in Johnston, where they lived since 1971.

An exemplar of the American dream, Tony worked for a few years in Providence as a tailor, saving money to open his own shop, Conte's Tailors in 1967. He specialized in bespoke, custom-made suits and shirts and boasted a veritable who's who of customers, among actors, politicians and sports figures, including Vincent "Buddy" Cianci, Claiborne Pell, Bruce Sundlun, Sheldon Whitehouse, Jerry Lewis, William Petersen, Marvin Barnes and Mosi Tatupu, as well as the Brown University Men's Rowing Team and chefs at Johnson & Wales University. But his favorite customers were his family, whether making dresses for his daughters and wife, a First Communion suit for his grandson Colin or refashioning the liner of his Burberry raincoat into a jacket and pocketbook for his granddaughter Anastasia. Tony enjoyed spending time with his customers, many of whom became friends. He operated Conte's Tailors for 51 years.

He taught at Rhode Island School of Design several times over the years. He taught and mentored innumerable students, some of whom have gone on to work for fashion lines such as Marc Jacobs and Macy's INC International Concepts.

Although he started playing relatively late in life, Tony was an avid golfer, once escaping from finishing his household chores, explaining in a note left on the refrigerator: "La giornata e troppo bella per gli lavori domestici . . . golfing" ("the day is too beautiful for housework, gone golfing!"). He was a member of the Cranston Country Club. He was a long-time fan of Joe DiMaggio and his New York Yankees (dating back to his time in Italy), Juventus F.C., the Italian national football club and the New England Patriots.

Besides his wife, he leaves his daughter Joanne and husband Dan Foley; daughter Lori; grandchildren Anastasia and Colin Foley; and his brother-in-law Pasquale Santonastaso (who was like a brother), and his wife Josefina and their daughter Maria. He was the brother of Lucio, Francesca, Giovanni, Madelena, Antonio and Clemente Conte.

The family would like to acknowledge the expert care he received from his medical team at the Fain Cancer Center at Miriam Hospital, as well as the loving care and attention he received from HopeHealth Hospice Care, particularly Jessica.

He was a life-long parishioner of St. Rocco's, both in his native Pietramelara and in Johnston. A Mass of Christian Burial will be held on Monday, September 21 at 10am in St. Rocco's Church, 927 Atwood Ave. Private entombment in Our Risen Christ Mausoleum in St. Anne's Cemetery in Cranston. In lieu of flowers, donations in his memory may be made to HopeHealth Hospice Care. HopeHealth Hospice Care