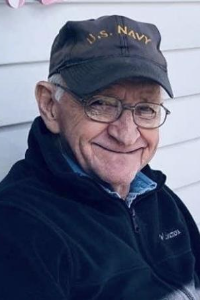 Gray, Maine - Navy Veteran Ronald E. King fought in many battles aboard the U.S.S. Charles S. Sperry Destroyer DD697 from 1950 to 1954 during the Korean War, but advanced lung cancer was one battle through which he would not emerge victoriously. Ron passed away on September 13 at Maine Medical Center in Portland with family by his side. He was 89 years young.

Ron was one of four children born to George and Almeda (Greene) King. His early childhood was spent in Jay, but his family relocated to Westbrook as he approached school age. They ultimately settled in the city of Portland and Ron attended local schools including Deering High School.

In December of 1950, he enlisted in the U.S. Navy and after four years of protecting our country, he returned home and secured employment at S.D. Warren Co. in Westbrook. That position would become Ron's lifetime job and he remained there for 33 years until his retirement in 1987.

Ron enjoyed a variety of activities during his later years. He loved watching kids participate in sports and helped coach LL3-FLT baseball for many years. He was an avid bowler, becoming a member of several local leagues. He looked forward to camping, particularly at the Fryeburg Fair, family outings, get-togethers with friends and cooking on his numerous grills. He also went on a number of motorcycle and snowmobile trips.

Ron lived to the fullest every single day of his life and enjoyed doing so, but nothing was more important to him than spending time with his wife, his children and his cherished grandkids. He was a caring and generous husband, a wonderfully affectionate dad and a protective grandfather. He made a positive impression on everyone whose lives he touched. His sense of humor was second to none and his heart was as big as all outdoors.

He greatly enjoyed frequenting and was a member of the AMVETS Post # 6 as well as the Fraternal Order of Eagles # 4131, both in New Gloucester.

Ron was predeceased by his parents, his sister Joanne Smith, his brother Raymond, and sisters-in-law Madeline and Charlene.

He leaves behind a large and loving family who will sorely miss his presence: his wife of 56 years, Nancy; two daughters, Michelle Joy and husband David, and Deb Larochelle and husband John; two sons, Jeff and wife Tina, and George and wife Mandy. Grandchildren include: Jessica Roth and husband Patrick, Jennifer Joy and wife Dani Fazio, Katrina Larochelle, Cassondra Tranchemontagne and husband Tyler, Jeffery King II, Stevie Marie Buck, Daniel King and Bryon King. (Future arrival) his first great grandchild Weston John Tranchemontagne. In addition, Ron is survived by his older and highly respected brother William. He will miss his nieces and nephews and is smiling down on them. He is also reminiscing about all the dances he attended with his cousins and all the stories they told.

Ron's absence will leave an immense void in the hearts of his deeply loved cat Java, his Meadowview family and especially by his "partner in crime", confidante, travelling buddy and continual source of companionship Linda Ladouceur. They shared a unique bond that will never be broken.

The family would like to thank the doctors and nursing staff in the I.C.U. and Fifth Floor Bean Tower at Maine Medical Center.

A graveside service will be on Thursday, September 24, at 12 noon at Dow's Corner Cemetery on the Cape Road in Standish. A reception and celebration of his life will follow at his daughter Deborah's home at 53 Partridge Road, East Waterboro, ME. Please adhere to State guidelines and social distancing practices. Arrangements are by Poitras, Neal and York Funeral Home. Online condolences may be expressed at: www.mainefuneral.com