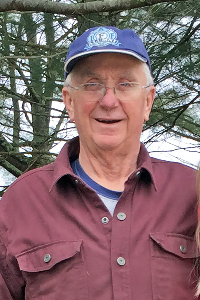 Charles “Jeff” Perry, 71, a lifelong resident of Bourne passed away on September 11, 2020 at Beth Israel Deaconess Hospital in Plymouth.

He was a Bourne man through and through. Born to Linwood and Alice, he grew up with his two older brothers Lewis & Linwood. Graduating from Bourne High and residing in the town for the duration of his life. He prided himself on knowing the history of the town, which was evident in his collection of town postcards, photographs, memorabilia, and his involvement in town committees.

Being a firefighter for the town was one of his greatest loves. He could tell you the details of just about any fire he was on a call for. Jeff began his career as an on-call firefighter in 1973. Becoming a full-time firefighter/EMT in 1975 retiring in 2002 as a Lieutenant. In November of 1986, he received recognition from the Town of Bourne for exemplary rescue actions in saving people who were trapped in a burning vehicle after a motor vehicle crash in the Sagamore Rotary. He notably responded with other firefighters to the 9/11 tragedy in New York City. He served many roles within the union as well.

Upon his retirement from the fire department, he went on to work with his cousin in her family business for many years installing floors. He then obtained his captains license and went on to captain many a Cape Cod Duckmobile tour out of Hyannis. He was fondly known as “Captain Jeff” to his passengers and coworkers. He delighted in driving the tours each day during the season.

Jeff cherished his time spent with others. He enjoyed nothing more than a good cup of coffee and good conversation. He was known for his ability to strike up conversation with just about anyone and listen to what you had to say and perhaps engage in some healthy debate.

He was also known to many as Brother Charles Jeffery Perry of Cawnacome Sunshine Lodge of Monument Beach. Jeff also obtained his 32nd degree in the Scottish Rite. He was a Shriner and a member of the Boston Court. He enjoyed Freemasonry with two of his sons Brother Charles Geoffrey Perry and Brother Benjamin Robert Powers.

He is survived by his wife Laurel (Ronayne) of Monument Beach. Along with his wife he is survived by his daughter Cheri Richard (David) of Kittery, ME, son Charles Perry(Karen) of Monument Beach, daughter Mary Blanchard(Matt) of Colorado , Benjamin Powers of Colorado, Elizabeth Hatton(Nick)of Centerville, and his step-daughter, Ashlee Ronayne of Pocasset. He was predeceased by son Timothy Powers. He adored his grandchildren, Samuel, Brady, Grace, Noah, Naomi, & Luke. He is also survived by brothers Lewis Perry of Bournedale and Linwood L Perry(Robyn) of Lake Worth, FL along with several nieces and nephews. He also leaves behind his beloved cousin Nancy Brown, of Centerville.

Due to COVID-19 no indoor service will take place. A graveside service will be held on Friday, September 18, 2020 at 11 AM, at Oakland Grove Cemetery, Bourne, MA. In lieu of flowers donations may be made to the Alzheimer’s Family Support Center, 2095 Main Street, Brewster, MA 02631 or online at alzheimerscapecod.org.